Drivers caught offending on so-called smart motorways in England could be offered re-education courses by police. 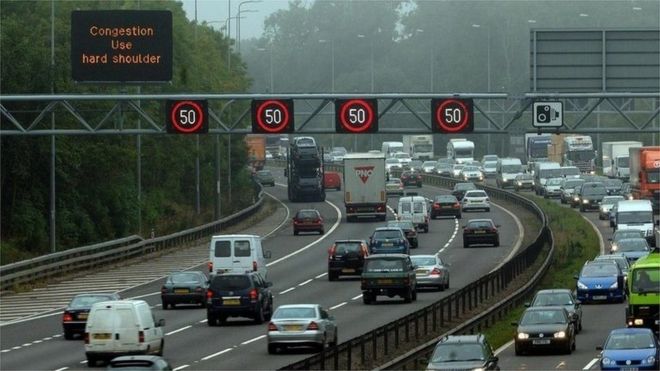 Figures obtained by BBC Radio 5live suggest an 18% rise in the number of people caught using the hard shoulder illegally between 2014-15 and 2015-16.

In the last financial year there were 1,014 tickets issued by the 38 forces that responded to a freedom of information request, compared with 859 for the previous year.

Among the excuses given were drivers who claimed they were half on the hard shoulder and half in the first lane because it was the fastest route between two places.

Another said they were driving on the hard shoulder because they were looking for signage to their destination.

The National Police Chiefs' Council said it wanted to create more awareness of the road rules and improve compliance with them.

The details are still to be confirmed, but ideas being discussed include courses for people who break the variable speed limit, use lanes closed with a red X or use the hard shoulder when it has been closed.

There are currently more than 200 miles of such motorway in England and Wales with another 200 miles either planned or under construction.

Current smart motorways include sections of the M25, M6, M4 and M1.

Suzette Davenport from the NPCC said the scheme would help motorists who are confused about when to use the hard shoulder as an extra lane.

"I genuinely don't know that people understand when it is OK," she said. "Absolutely there are people who will now use the hard shoulder if there is a queue of traffic so they get off more quickly because they don't want to sit in a queue.

"I'm not sure that would have happened say 15 years ago."

She says a motorway course would bring it in line with other parts of the road network.

"We don't have national driver offender retraining courses for the motorways. So if you get caught on the motorway you are going to get a ticket.

"Whereas we have about one million people a year on other road networks who are being caught driving and are going on national offender retraining. So we've been talking to Highways England about developing a course."

She added: "The courses are based on academic rigour and research to make sure we are looking at the right attitudinal things so we are hopefully affecting people's behaviour not just as they walk out of the classroom, but for some time to come."

The government is currently consulting on plans to allow learner drivers on to the motorway in dual control vehicles under the supervision of an instructor.

But the RAC wants motorways - and the rules surrounding smart motorways - included in the driving test.

Steve Robinson, safety adviser for the RAC, says it is certainly needed.

"There is probably a shortfall currently, where somebody passes their test today, having never set foot on the motorway and off they go tomorrow on a 70 mile per hour speed limit motorway, some of which might be dynamic or all lanes running.

"I really think education is the key really. "

Police Scotland does not currently offer driver re-education courses but says it is something the force has been considering.

Re: 'Smart motorway' offenders could be offered retraining

This is the reality of the smart motorway - last night going home:

Users browsing this forum: No registered users and 2 guests

We are the UK's only desicated Hypermiling and fuel saving community!