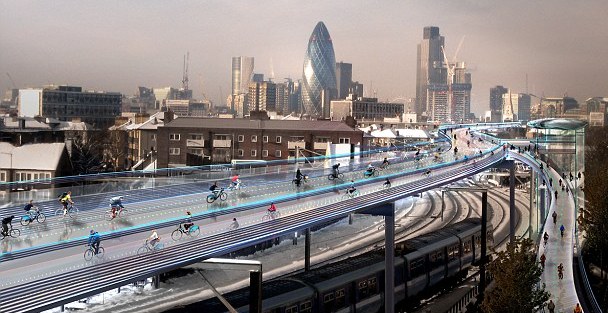 One of the world’s most prominent architects has revealed plans for a 135 mile cycle path network above the busy streets of London.

Named “SkyCycle”, the project would see a network of cycle paths constructed above existing rail lines to provide cyclists with a road traffic free network covering a huge proportion of the UK’s capital.

The three story high structure is estimated to increase travel times across London by up to 29 minutes and provide a safer environment for cyclists who have been increasingly aware of the risks they take in the notorious London traffic. Sadly, six cyclists were killed in the space of just two weeks in November 2013 as a result of road accidents. Its hoped that a network such as SkyCyle could eliminate the risks involved by cycle commuters.

The man behind the plans Sir Norman Foster said, “Cycling is one of my great passions – particularly with a group of friends. And I believe that cities where you can walk or cycle, rather than drive, are more congenial places in which to live. To improve the quality of life for all in London and to encourage a new generation of cyclists, we have to make it safe. However, the greatest barrier to segregating cars and cyclists is the physical constraint of London’s streets, where space is already at a premium. SkyCycle is a lateral approach to finding space in a congested city. By using the corridors above the suburban railways, we could create a world-class network of safe, car-free cycle routes that are ideally located for commuters.”

However these plans don’t come cheap. The first four mile stretch has been estimated to cost approximately £220 million to construct.

Like many other cyclists, I applaud the plans. Having had first hand experience with London traffic I know too well the dangers of two wheels in our capital. The separation of the traffic would be a sure fire way of cutting the needless deaths and accidents that plague cyclists brave enough to dice with the city traffic.

The plans go much further than simply providing a safer place to ride, its hoped that the network could help move even more people over to two wheels, cutting the dangerous emissions caused by motor vehicles and improving the health of our increasingly obese society.

We’ll keep you updated as the project continues to gather pace.