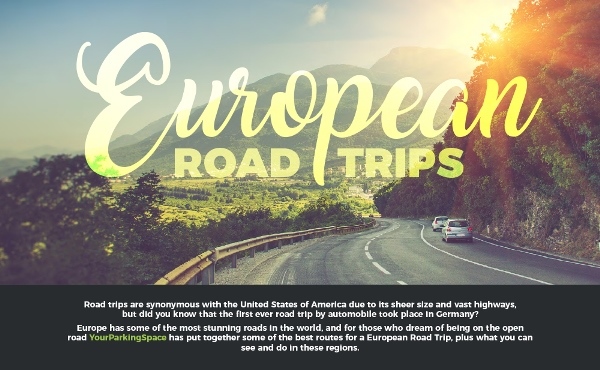 Road trips are synonymous with the United States of America due to its sheer size and vast highways, but did you know that the first ever road trip by automobile took place in Germany?

Europe has some of the most stunning roads in the world, and for those who dream of being on the open road YourParkingSpace has put together some of the best routes for a European Road Trip, plus what you can see and do in these regions.

The Stelvio Pass is one of the highest and most dramatic mountain passes to drive in Europe. This mountain pass shot to fame in 2008 when it was voted one of the best driving roads by Top Gear and provides stunning views of the Italian and Swiss Alps.

Approaching the Stelvio Pass from the North West side you get to drive up the Stelvio Pass’s renowned wall of 48 switchback turns. Each of the turns is numbered with stones so you can count your way to the top. Heading back down the pass towards Bormio provides several vantage points for photographs of this famous route.

The Stelvio Pass can become very busy during peak times, so it is advised that you drive it early in the morning and outside of the peak months of July and August.

Widely regarded as the best driving road in the UK, the Old Military Road A93 and A939 takes you through the heart of the Cairngorms National Park in Scottish Highlands. You can enjoy endless stunning views on a road filled with twisting hair pins, rollercoaster-like ups and downs and steep gradients.

The route starts at Bridge of Cally, following the A93 into the Cairngorms National Park, driving through Braemar and past the Queen’s private residence Balmoral Castle. From there head onto the A939 for some more stunning highland views all the way to Grantown-on-Spey.

There is a wide variety of different wildlife in the Highlands so keep your eyes peeled for deer, snow rabbits and grouse.

Widely regarded as one of the best roads in the world, the Susten Pass is commonly referred to as one of the ‘Big 3’ passes which also includes Grimsel and Furka. Although not as well-known as the other two, the Susten Pass has captured driver’s hearts with its sweeping valley roads, stunning forward views and its challenging switchbacks which take you to the summit at 2,224 meters.

The route starts in Wassen and finishes in Innertkirchen, and provides multiple places to stop and take in the spectacular mountain views. The road down to Innertkirchen takes you through forests and across fabulous stone bridges.

Due to its altitude, the Susten Pass is open seasonally usually at the start of June and closing at the end of October. The pass can get extremely busy during this time and is a favourite with bikers, so it is advised that you travel the pass mid-week to avoid the bulk of the traffic.

The Black Mountain Pass (A4069) connects Llandovery with Gwaun-Cae-Gurwen and is regarded as one of the best road in Wales, if not the UK. This A road twists and turns over the Black Mountain in the Brecon Beacons National Park and features an array of sharp corners, hairpins and switchbacks.

The route begins at Gwaun-Cae-Gurwen and joins the A4069 at Brynamman. The road then winds across and over the Black Mountain range and comes out near Llangadog before continuing onto Llandovery.

The Black Mountain Pass is extremely popular with drivers after it was featured on Top Gear, but you can still expect little traffic on the road apart from on the sunniest weekends. One word of warning though, watch out for livestock (especially sheep) that have strayed onto the road particularly after blind corners.

The Black Forest region of Germany is famous for its winding roads and is a popular choice for road trips amongst the biker community. One of the best and most accessible is the Schwarzwald Hochstrasse (route 500). This elevated road starts just outside Freudenstadt and travels north to Baden-Baden, it combines smooth and sweeping fast sections with dense forest trails and tight switchback turns.

Near its highest point, around the Hornisgrinde Mountain there are some great elevated views with plenty of place to park up, take in the scenery and take pictures. The only downside is that route 500 is a major road in the region so can become busy at certain times, we suggest that you plan your journey in the early morning to take advantage of the reduced traffic.