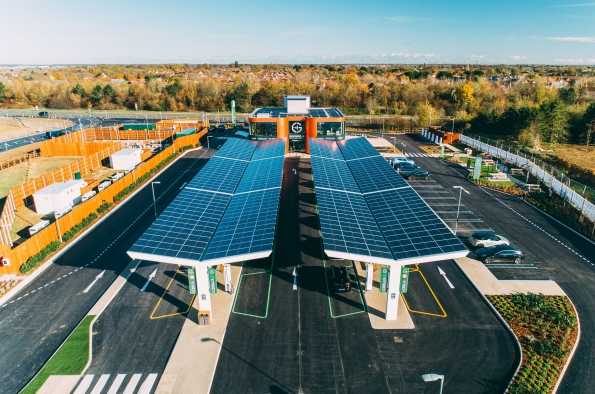 GRIDSERVE has announced that the UK’s first Electric Forecourt is open for business, representing a major breakthrough for massive expansion of electric vehicle (EV) charging infrastructure in the UK. The site, near Braintree, Essex, represents the first of over 100 electric only recharging stations being built by GRIDSERVE over the next five years.

With the 2030 ban on petrol and diesel cars looming, it’s hoped that this site and the sites to come will help bolster confidence, and range anxiety of those yet to take to the road in an electric vehicle.

GRIDSERVE is throwing a whopping £1bn at it’s UK-wide programme and “aims to make EV driving an enjoyable, ultra-convenient and stress-free experience”.

This first station boasts room for no less than 36 electric vehicles to be charged simultaneously, representing 350 kW of charging power. Electricity is generated from both the solar power canopies above the chargers, and a network of hybrid solar farms, also operated by GRIDSERVE.

Drivers charging at the Electric Forecourt will initially pay just 24p per kWh of energy, which is currently the lowest ultra-high power charging rates on the market today – meaning a typical charge from 20% to 80% costs under £10 for an average-size electric vehicle.

With high-powered charging points still few and far between, this investment by GRIDSERVE represents a massive step forward in providing the infrastructure needed to support the UK’s future mass EV adoption. We hope that conventional filling stations take note and embrace the inevitable.

Toddington Harper, Founder and CEO of GRIDSERVE, said: “Today’s announcement represents a major milestone in achieving GRIDSERVE’s purpose to deliver sustainable energy and move the needle on climate change. It’s our collective responsibility to prevent greenhouse gas emissions rising further, and electric vehicles powered by clean energy represent a large part of the solution. However, charging has to be simple and free of anxiety, which is why we’ve designed our Electric Forecourts® entirely around the needs of drivers, updating the traditional petrol station model for a net-zero carbon world and delivering the confidence people need to make the switch to electric transport today – a full decade ahead of the 2030 ban on petrol and diesel cars

“Together with our charging-included electric vehicle leasing business, that we are also launching today in partnership with Hitachi Capital (UK) PLC, people now have the full confidence to make the transition to an electric vehicle, knowing that charging is in-hand, and it’s actually less expensive to use an electric car than a petrol or diesel alternative.”