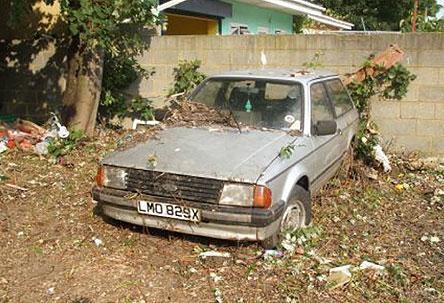 Cars are often seen as a status symbol, if you are successful: you have a nice car. Most of us strive to have the newest, shiniest and most expensive steed that they can afford, with many stretching themselves beyond their means. This is great for car manufacturers and dealerships, not so good for the environment and your bank balance.

Bangernomics is the term used to describe running a car next to nothing. Its about taking a second hand car that would normally be fit for the scrap yard or dissection by the fire service in a training session and using it as your day to day runner.

The environmental benefits of bangernomics are substantial. New cars require huge amounts of energy to produce and the associated shipping and parts travel produces CO2 emissions by the tonne. Bangernomics requires no more energy to undertake than the drive to pick your second hand motor up from its beloved “previous owner”.

Lets not kid ourselves, it nice to be green but for many… money talks. Bangernomics can literally save you thousands of pounds. Just think… no more finance / loans, dealership services, depreciation and repair bills. That means more money in your pocket to either save or enjoy.

How do I start?

Lets start with the 3 basic principles of Bangernomics

Cars have moved on quite a bit since the era of the Mk1 Escort and VW Golf, even today’s cheapest “bangers” can come equipped with air conditioning, CD player and modern safety features such as airbags and ABS. For less than the costs of a flat screen telly you could be sporting a well made, safe and well specced car that could hardly even be classed as a banger. The key is getting the right balance.

But what about Hypermiling in my banger I hear you ask. Well, I will be the first to acknowledge that your banger will most likely only return a fraction of the MPG that’s capable from most of the diesel superminis out there. However, its all relative: the car only cost a fraction of the new frugal supermini.

Hypermiling is about maximising your MPG by adapting your driving style, its not so much about the return but what improvements you can make over normal driving. Hypermiling might not ever be enough to help you return 60+ mpg, but together with bangernomics, its guaranteed to save you a fortune.

We’d love to hear about your experiences with bangernomics, so leave a comment below or join our busy Hypermiling forum.

Our Weekly Hypermiling Tip #7: Shop around

Our Weekly Hypermiling Tip #8: Tune in, Turn off