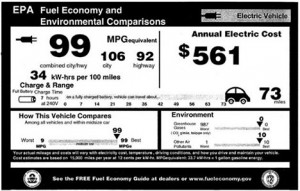 As far as we know, the first production Chevrolet Volt models are still awaiting their official EPA stickers. Nissan, though, has received the details on what the government agency has rated its all-electric Leaf at, and it looks good: a combined rating of 99 miles per gallon (equivalent) which breaks down into 106 city/92 highway. The official EPA range for the car is 73 miles, which Nissan admits is a variable (we know it can be beaten), and the annual electric cost is estimated at $561. The Leaf is the first vehicle to get this new label, Nissan spokesperson Katherine Zachary told AutoblogGreen that 99 mpg puts the Leaf way in front into the “best” fuel efficiency rating for mid-size vehicle class. It’ll be interesting to see how Nissan uses this in upcoming advertisements, especially since the company has called the car a compact in the past.

So, how does the EPA calculate mpg for an electric car? Nissan’s presser says the EPA uses a formula where 33.7 kWhs are equivalent to one gallon of gasoline energy. Also, the EPA determined the Leaf’s efficiency is 3.4 miles per kWh, another number you can easily beat while driving, as the driver info screen can prove. Since the Leaf has a 24 kWh battery pack and can go, officially, 73 miles, then, the EPA says, it could theoretically go 99 miles if it had a 33.7 kWh pack (and everything else about the car remained the same). Make sense?

Maybe, but the car will also have another label from the Federal Trade Commission that it applies to all alternative fuel vehicles. That sticker will show that the Leaf gets 96 to 110 miles of range, so don’t trust everything you see. Check out Nissan’s official press release after the jump for more details.

An Honest Guide on How to Buy Your First Green Car 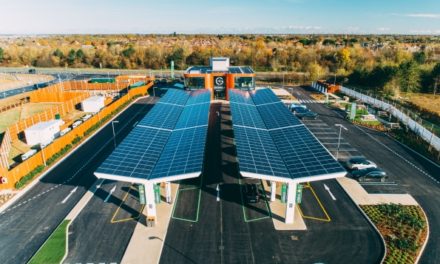 Stanford University developing “charge as you go” technologies for EV’s