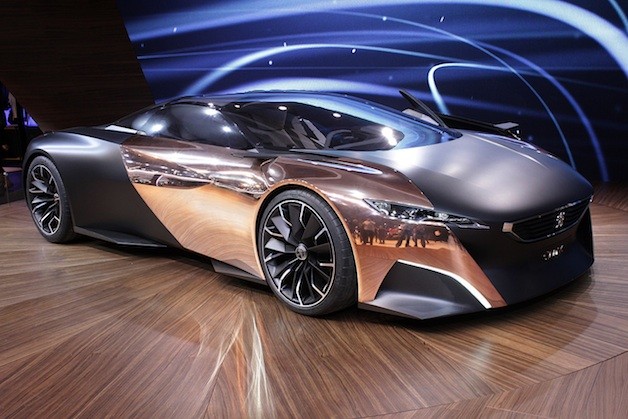 Peugeot have confirmed that they will be testing their Onyx diesel-hybrid at this years Goodwood Moving Motor Show And Festival Of Speed.

The French firm will be using the event to road-test and publicise its futuristic diesel hybrid car to an eager audience.

The Onyx features a 3.7-liter, V8 diesel engine mated to an electric secondary power plant. With internal combustion providing 600 BHP and 80 from its electric motor it’s guaranteed to raise some eyebrows at this years event.

The Onyx is constructed from a fully carbon fibre shell and features all the bells and whistles you would expect from a flagship concept car including futuristic doors and copper panels. According to Peugeot the panels are hand crafted and are left unprotected, meaning over time the metal will weather and add character to the car.

The Onyx uses what Peugeot call Intelligent HYbrid4 technology. The system  recovers kinetic energy which is stored in lithium-ion batteries. These power the 80 BHP motor, adding some extra ponies when needed. At present there’s no word on the Onyx’s MPG figures but from the engine configuration we would guess that the platform is firmly aimed at raising the profile of it’s Intelligent HYbrid4 technology and gaining a few BHP in the process.

With the use of such advanced technology and exotic materials we hazard a guess that if the Onyx does go into production it will come with an eye watering price tag, putting it out of range of many mere mortals. With such a high price tag we don’t expect it will go hand in hand with cheap car insurance from Express Insurance or even qualify for cheap road tax, things that many of today’s production hybrid cars enjoy.

Over the years Goodwood has been very popular with manufacturers wanting to show off their latest and greatest automotive masterpieces. It’s described as the “largest motoring garden party in the world ” and his set in the immaculate grounds of Goodwood House. Car manufacturers from around the globe will be on site, hoping to out do each other in the race to secure buyers for their ever growing product ranges.

Highlights of this years event include:

More than 50 super cars from the automotive greats such as Lamborghini, Porsche, Bugatti and Jaguar will be represented. A new parking area close to the hill will feature many of these cars allowing the public to drool over the gleaming rides.

The Goodwood Moving Motor Show will be held on the Thursday before the main event. The event will the hoards of new car buyers and enthusiasts who flock to the show the opportunity to see the very latest models up close, and in many cases drive them.

The last airworthy Vulcan bomber, recently threatened with decommission, will fly overhead at this year’s show. XH558 first flew in 1960 and still does thanks to the Vulcan to the Sky Trust.

Today’s masters of the wheel will be on hand to thrill the crowds and  indulge in some tyre shredding burnouts. Taking to the track will be Jenson Button, Lewis Hamilton, Sergio Perez, Nico Rosberg and Roman Grosjean.

For further information about the event and to secure your tickets to one of the hottest automotive events of the year than check out the Goodwood website.