The Cosmotron – A Car Made From Household Rubbish! 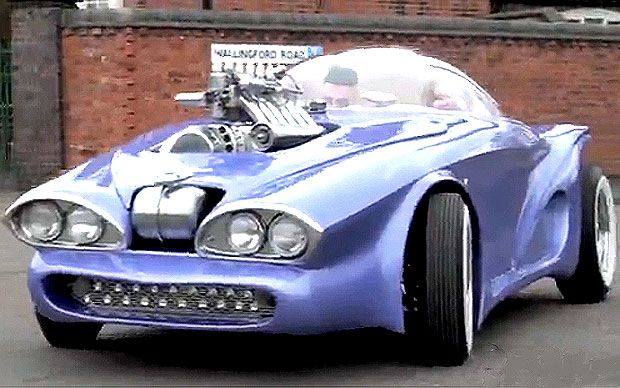 The Cosmotron is the latest customised vehicle par excellence. Hand-built and a one off from the Cycle Works in Leicestershire, it can be hired from them to advertise events of any kind. It turns heads and it is all about recycling.

The car is the brainchild of mechanic Paul Bacon, from Leicester, who is a throwback to all those ingenious inventors Britain used to be famous for. James Watt had his steam-engine; Jethro Tull his seed-drill; Richard Cartwright his power loom. Paul Bacon has his Cosmotron, all built, like the very best inventions, in the man’s back garden. He admits he had help, because there’s nothing ‘home-made’ about the Cosmotron’s sleek lines and 22nd century profile.

On the face of it, it’s a bubble car with a clear dome that serves as a roof and lifts off for the driver and passenger to get in. But if you’re thinking of the iconic little three-wheelers of the 1950s, you ain’t seen nothing yet! The Cosmotron has power steering, a 2.8 litre engine, electric windows and air-conditioning. Its chassis is essentially that of a BMW Z3 and it has a top speed of 135 mph (not that Mr Bacon has tested that on the streets of Leicester!).

With such an experimental vehicle, reception to it from the motoring world has been generally positive. The exposed engine, says one online comment, it topped with salt and pepper shakers and the front and rear grilles decorated with bottle tops. The interior upholstery was made by Mrs Kirsty Bacon and the metallic paintwork gives it a futuristic feel reminiscent of the de Loreans of several years ago. The steering wheel hub is a firework rocket and the gear stick looks huge from photos available although of course we all know that size isn’t everything.

In many ways, the Cosmotron is a hybrid. It is made from recycled bits and pieces and looks very much the car of the future, but it runs on standard petrol and is just as practical as any two seater sports car. Don’t look for too much in the way of luggage space however and if you like to take the kids out for a run at the weekend – you can’t. But the Cosmotron is great fun and apart from anything else you will never be alone when you travel in it, because it attracts people like bees to honey. Upcycling is the name of the game and as with all one offs, the Cosmotron will never be entirely replicated, if only because everyone is likely to have a different collection of bottle tops.

This is not a vehicle which will ever be put into full production, although there is one person who should buy a Cosmotron – the absent-minded. You would never have to search up and down the rows in a multi-storey car park to find where you had left your car if you drove one of these. All you need do is look for the admiring crowd! Plus you will need a car insurance company like The Green Insurance Company if there is any hope in getting insured.

In a day and age when many people seem to be thinking more and more about the environment and how they can be more green in their everyday lives, the Cosmotron is obviously meant to stimulate that debate even more. Surely if a vehicle this attractive can be made out to rubbish, what can you do to reduce your carbon footprint?