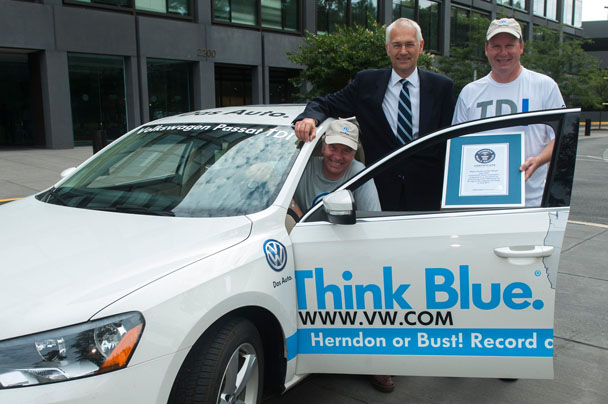 US Hypermilers have stepped into the record books following an epic Hypermiling run of 48 US states that resulted in an amazing 77.99 mpgUS / 93.66 mpgUK for the trip.

Wayne Gerdes and Bob Winger piloted the 2013 VW Passat TDi on its 8122 mile voyage and consumed a total of just 104.94 US gallons of fuel. The event took the Hypermilers through 48 states ok the US and took just over 2 weeks to complete. The road trip saw them take the title for the Lowest Fuel Consumption of 48 U.S. States in a non hybrid,  smashing the previous record and bettering the record for a hybrid car (also set by Wayne) by an amazing 13 US MPG.

Wayne Gerdes said, “We felt we had a good chance of beating the existing record with the Passat TDI but to smash it by averaging 77.99 mpg is really impressive and a testament to the potential of Volkswagen’s TDI Clean Diesel vehicles.”

Wayne adds this recent record to his array of other accolades and we expect to see more events of this nature in the near future as manufacturers scramble for the limelight in the battle for the ultimate fuel sippers.

In the UK, the fuel sipping range of VW cars is known as the bluemotion range rather than “clean diesel”. Official figures claim that the UK variant should be able to achieve (up to) 69MPG while outputting just 109g/km of CO2 from the 1.6 TDI power plant. Those figures highlight both what a cracking job VW is doing with its diesel cars and also what a difference Hypermiling can make to a very efficient car to start with. Hats off to you Mr Gerdes.