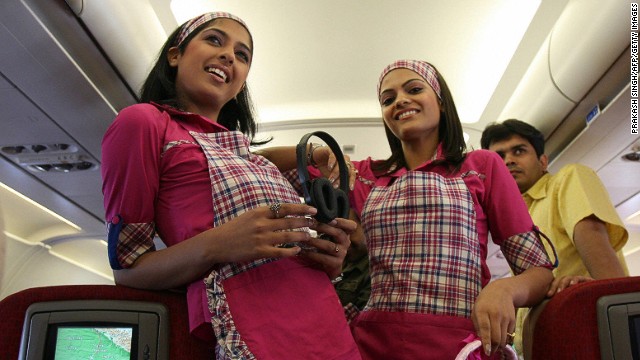 The lovely ladies serving extortionately priced drinks and sandwiches on GoAir’s flights are set to be even more common place if the Indian budget Airline has its way. We agree that they are definitely easier on the eye than their male counterparts but its the planes efficiency and fuel savings that’s pressing the airline into employing a higher ratio of  female cabin crew staff.

Speaking to the Times of India, the airline went on record to say that from now on they will be predominantly employing women as they are “15-20 kilos lighter on average than men”.

The male population of GoAirs cabin crew won’t be laid off but GoAir’s new weight saving efforts but will effect it’s recruitment policy going forward as they strive to meet the industry average of 70/30 in favour of the lighter sex.

The weight savings for the airline don’t stop there, they have also cut the amount of water on board and the number of pages in their on-board magazines in a bid to reduce fuel usage.

In these hard times where airlines are struggling to cope with rising operating costs, many are choosing to take drastic measures to increase their fleet’s fuel efficiency. Some airlines such as Samoa Air have already instated the inevitable “pay per pound” ticket prices which charges those with an aversion to cake and sweets more than us slimmer flyers.

With this is mind, just remember that the same goes for your car’s fuel efficiency. Lugging around a bootful of tools and junk is hurting your MPG and costing you money, it also might be another reason to shed those winter pounds you have tucked away under that strained waistband.