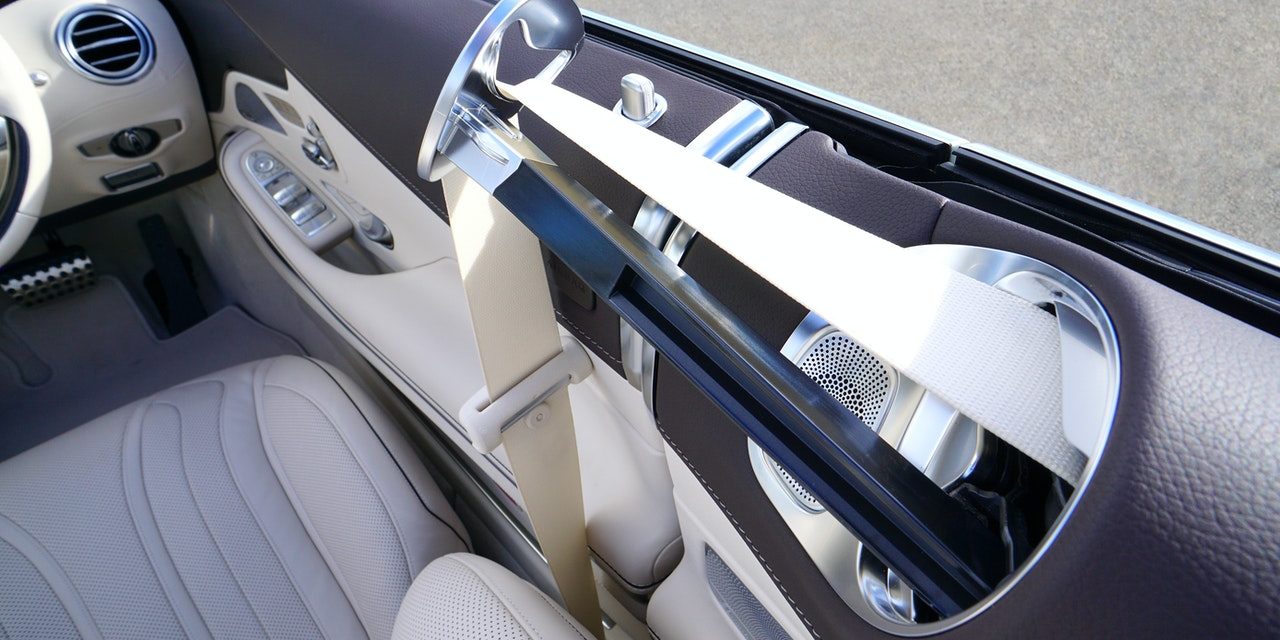 Seat belts are an unarguably important safety feature that literally every modern car is required to have. The Center for Disease Control, or the CDC, says that as much as 52% to 60% of all deaths related to car crashes the one who died was unrestrained in the car. According to the United States National Highway Traffic Safety Administration, or NHTSA for short, more than 50,000 lives are saved each year from dying in a traffic accident because of seat belts.

In short, don’t play casino games with your life – wear a seat belt. It’s not an inconvenience it’s what could possibly save your life someday.

But where did they come from? Who figured out that you can survive a crash a lot easier if you strap a piece of leather across yourself?

The history of the seat belt

The first invented thing that’s closest to our modern seat belt was invented by a man named George Cayley back in the 1800s. He was a notable English engineer born in 1777 in Yorkshire England. He’s the inventor of multiple inventions and the basis of them is still used even to this day.

He invented self righting lifeboats so that won’t capsize while stuck at sea for days and possibly weeks. He built a small scale helicopter, not big enough for a human but was able to generate lift through a spinning set of propellers. He even created a small scale internal combustion engine using gunpowder, an engine that predates the later designed gas or coal engines that were fundamental to the industrial revolution.

But easily the most notable thing that he invented was the first glider capable of carrying a human. This is different from the famous plane that the Wright brothers built because their plane used an engine and generated its own lift. Cayley’s glider simply glided on air and didn’t need an engine to fly. It also wasn’t easily controllable and was missing certain key features that are common in most, if not all, modern aircraft. Like the ability to go up.

But alas, Cayley’s invention was crucial in inventing later planes capable of flight both up and down. But this isn’t an article about planes, so why am I talking about them? Well, Cayley’s glider is also the first known use of seat belts in history.

Apparently staying inside of something gliding hundreds of feet above the ground is somewhat important. At least George Cayley’s thought so. So he wanted to invent something that would make sure the passenger couldn’t fall out and, you know, die.

So he created a leather strap to go across the legs to hold a person into the vehicle while it glides and prevent any accidents, deaths, or unfortunate lawsuits.

While this was the first use of one that we know of it wasn’t the first patented one. That belongs to an American man named Edward J. Claghorn. He patented a design for seat belts on February 10, 1885 that were meant to be used inside of New York taxis.

This was to help protect tourists inside of them so that they wouldn’t fall out or get injured. With the way the streets of New York were in 1885 I’m not surprised he felt that tourists would want something to strap them into their taxi.

After this patent seat belts started becoming a little more common inside automobiles but not as a safety device. There was more focus on using them as a means to stop drivers and passengers from sliding on the more bench like seats they had back then than as a way to protect passengers or drivers in the event of a crash.

Even though it was invented and patented in the 1880s it wasn’t until 1930 that it was thought of for safety reasons. In 1930 in the United States, automobiles were becoming much more common on streets. They were closer to a device for the middle class and not just the rich.

With so many more people and cars on the roads, the number of crashes was also increasing and the need for safety devices inside of automobiles was becoming much more apparent. In 1930 it was United States physicians testing different ideas for what they could add to cars to make them safer that figured out the major impact lap seat belts have.

They immediately started petitioning and urging for the major car companies of the time, and event the other ones too, to start adding seat belts into all their cars straight from the factory. In 1954, the United States Sports Car Club of America starting requiring drivers to have and wear lap seat belts in their car before being able to drive or participate in events, races, or tournaments.

And in the year just after that the Society of Automotive Engineers, or SAE for short, a group designed to overwatch and make decisions around automotive and automobile design in the United States of America, appointed a Motor Vehicle Seat Belt Committee. This committee was meant to overlook the design, functionality, and safeness of seat belts designed and put in cars.

The first group to have widespread and almost universal use of lap seat belts were race car drivers. Presumably, it has to do with just how much more prevalent crashes were back then in racing and how much more visible it was how much lap seat belts could save someone’s life on the race track.

While the two point lap seat belt was much safer than nothing it still wasn’t that safe. You could still fly forward or at least have your upper body fly forward. The three point seat belt has the extra strap coming down and over your chest so that you can’t fly forward so much.

It was big when it came out. It drastically cuts down on the chance of severe injury in a car accident than if you were to wear no seat belt or even just the lap seat belt. Because of how important this was to safety Nils Bohlin decided not to patent the design of it.

He decided to let any company use his design because of how much its capabilities would be able to save lives. This was obviously quite a noble thing to do considering he could’ve tried to market and sell the device instead of giving it away.

After this, Nils left the company he worked for in Sweden because he was hired by Volvo, one of the largest car companies in America at the time, for a much higher price. At Volvo he continued his work on the three point seat belt and worked more on trying to make it even safer and finely tuned the device a few more times.

When he passed away in 2002 Volvo published a paper discussing how many people his device the three point seat belt saved in the almost four decades that he had invented it. The estimated number was more than a million lives saved by one invention.

Obviously back when it was invented the American public started seeing more accidents and the dangers they had and the deaths they caused. So the popularity of a safety device that could prevent some of it was very high in public appeal. The sales of seat belts skyrocketed in the United States.

You could find seat belts at gas stations, mechanic shops, and other types of stores of that type. Almost all cars allowed you to buy seat belts as an optional piece of safety when you purchased your car. Most of them would even install it for you or let you buy a version with it already installed!

In 1966, the first law came around in the United States requiring cars to have seat belts in them from production. Although at the time it wasn’t illegal not to wear the seat belt, just to not have it in the car at all. In 1970, four years later, the second first-world country followed the United States and also made a law requiring all automobiles to have seat belts in them and that was Australia. Specifically Victoria, Australia passed the law.

By 1975, almost all first-world countries had laws saying that all cars needed to have seat belts. And it was easier for car manufacturers to make all the cars with seat belts at this point so they were the norm around the world.

Even though they were the norm in cars since the fifties pretty much it was a completely different story with actually wearing the seat belts. The government put in place an almost two decade long ad campaign to try and get both adults and children to understand the importance of seat belts and how much it could save a life.

While this ad campaign was very important and greatly boosted the number of people that were wearing seat belts it wasn’t enough. The United States government decided that it wasn’t enough and that people needed more incentives to try and get them to wear seat belts while in a car.

That’s why by 1995 all states, except New Hampshire, had some form of Click it Or Ticket laws. Those are laws where if you’re caught without a seat belt while driving a car you can be ticketed and fined.

In some states, there are laws that if you get more than a certain amount of tickets you can have your license taken away, further incentive by the United States government to not speed and wear your seat belt.

Other Safety In Cars

As good as seat belts are in saving lives inside of a car they still weren’t enough to enough safety in the majority of cases. This is still an ongoing problem and study but car companies have been trying to find safer and safer things to put into their cars to protect the passengers in drivers.

It ranges from advancements in break designs, from breaks in the first cars sometimes only working on one wheel (A lever that pushed into the wheel to slow it down!) to full four-wheel hydraulic brakes with an emergency mechanical brake system that activates if the hydraulics fail.

Air bags started being added to cars along with padding on a lot more things, with fewer levers sticking out that you can get impaled on easily. A lot more research and thought were being put into things like engineering the car around safety.

Now every car goes through a massive amount of crash test testing and there are entire fields designed around figuring out crumple zones and shoots to push the engine under the car. So that it doesn’t go back and crush the people in the front seat.

While it’s getting better there is still a lot to be figured out. There’s automatic braking which has been coming out more recently.

There has been some controversy, as with all things in life, mostly complaints that seat belts and safety devices aren’t designed with women in mind, since most crash test dummies are modeled after men not women.