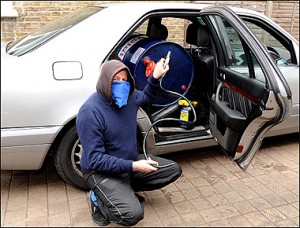 Thefts from cars is on the increase as fuel prices soar

Fuel thefts from vehicles are on the rise across the UK according to the RAC, which has reported a surge in the number of call-outs since the start of the year.

Record prices at the pumps are thought to be behind the growing trend, the motoring group said.

There has been a 500% increase in call-outs to fuel thefts throughout Greater London.

And nearly every other region of England has seen a rise of more than 50% since January, the RAC said.

Police forces say they cannot give accurate figures, as they are recorded in the same way as all thefts from vehicles.

But the RAC said it was becoming an “alarming” situation.

RAC patrolman Prakesh Patel said: “These figures are clearly symptomatic of the desperation motorists are feeling amid rising fuel costs.

“The actual numbers of fuel theft breakdowns may still be relatively small, but it’s alarming that we’ve seen such dramatic increases reported since the beginning of the year.

“Until the Government acts in the interest of motorists and reduces, and not just freezes, taxes, I fear we are at the beginning of a worrying trend.”

There are three ways petrol and diesel are normally stolen from vehicles’ fuel tanks.

It can be siphoned out or fuel lines underneath the tank can be cut.

Even more worrying, says the RAC, is a trend for thieves to drill into tanks to get to the fuel.

“Once they have taken the fuel away you’re still left with a problem because there could be fuel under the car and you could be left with a very dangerous situation,” a spokeswoman said.

She said turning on the ignition or dropping a cigarette stub onto the ground next to the car could have disastrous consequences.

Dan Sparks, 35, from Southam, near Leamington Spa, Warwickshire, fell victim three weeks ago when diesel valued at about £45 was stolen from the tank of his Seat Alhambra.

Mr Sparks, who works in logistics, said the car’s tank was half full when he arrived home from work, but was completely empty when he tried to start it the next morning.

The car had been parked as normal on the drive at the side of his house when somebody broke into the tank by levering off the fuel cap.

“It’s quite frustrating and there’s a degree of anger because you’ve got to put the fuel back in and someone has nicked it from you,” he said.

“With the price of fuel going the way it is, it’s become a more attractive prospect for thieves.”

A 29-year-old council worker from Greenhithe, near London, told BBC News about £25 worth of petrol had been stolen from her Nissan Micra in June.

The woman, who did not want to be named, said fuel from her neighbour’s car had also been taken.

Although the RAC could not provide detailed figures for fuel theft call-outs in each region of the UK this year, the spokeswoman said there had been hundreds of extra cases.

The AA has also seen a jump in the number of reported fuel thefts.

But it said the problem was still relatively small.

Last year it was called to just three incidents across the whole of the UK, a spokesman said.

But this year to date it has responded to 16 call-outs.

“The problem will be bigger than those figures suggest,” he said.

“But in the big scheme of things, compared to general car crime, there’s far more chance of your car being broken into than it being targeted specifically for the fuel.

“Most of our guys on the ground all go through a year without dealing with a case, but a lot are hearing of it more anecdotally.”

He said trucks, vans and 4x4s were the most likely vehicles to be targeted.

“If you’ve got a garage or a building you can leave your car in at night it’s sensible to do that.”