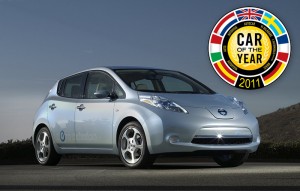 The Leaf is the first electric car to get the title

Nissan’s flahship EV the Nissan Leaf, which will be built in Sunderland from 2013, received Europe’s most high-profile motoring award on Monday night.

Leaf was named 2011 European Car of the Year in November, before the first car even hit the road. It was the first electric vehicle to be shortlisted for the award and its success makes Nissan the first Japanese manufacturer to notch up a double.

The EPA rated the Leaf at 99 MPGe, or miles per gallon equivalent, which means that on average, the same amount of energy contained in a gallon of gasoline can propel the Leaf for 99 miles.

It is a great honor for Nissan LEAF to be recognized as the European Car of the Year – the first all-electric car to receive this distinction. Like previous Car of the Year winners, Nissan LEAF is an appealing, competitive car, with no compromise on style, features, safety, performance or handling. Yet it stands apart as an innovative car that reflects a clear vision of the future of transportation – a vision of sustainable mobility

More information and the press release after the break

PARIS, France (Jan. 24, 2011) – The trophy recognising the revolutionary Nissan LEAF as Europe’s Car of The Year 2011 was handed over to Nissan Motor Co.’s President and CEO Carlos Ghosn in a special ceremony held today at the Pavillion Gabriel in Paris.

To win the award, the 58 CoTY members – leading motoring journalists from 23 European countries – placed Nissan LEAF ahead of six conventional new cars on the shortlist. It is the first time in CoTY’s 48-year history that the annual award has been won by an electric vehicle.

“I am convinced that we will see other electric cars named Car of the Year in the future. But when we do, we must always remember that only one can be the first. And that is why Nissan LEAF Car of the Year 2011 is – and will remain – so very special,” said Håkan Matson, president of the CoTY jury, speaking at the ceremony.

“It is a great honor for Nissan LEAF to be recognized as the European Car of the Year – the first all-electric car to receive this distinction. Like previous Car of the Year winners, Nissan LEAF is an appealing, competitive car, with no compromise on style, features, safety, performance or handling. Yet it stands apart as an innovative car that reflects a clear vision of the future of transportation – a vision of sustainable mobility,” said Ghosn after receiving the trophy.

Nissan LEAF is powered by an in-house developed compact electric motor and inverter in the front of the car driving the front wheels. The AC motor develops 80 kW of power and 280 Nm of torque, enough for a maximum speed of 145 km/h (90 mph). The electric motor is powered by an advanced laminated lithium-ion battery with a power output of more than 90 kW. Developed by the Automotive Energy Supply Corporation (AESC), a joint venture between Nissan and electronics giant NEC Corp., the breakthrough battery has the capacity to store twice as much energy as the previous generation battery.

The zero-emission car is fully equipped with features such as regenerating braking, air conditioning, satellite navigation and a parking camera. Innovative smart phone connectivity will allow an owner to heat or cool the interior of the car remotely via a mobile phone. The single option is a solar panel mounted in the rear spoiler.

Pre-orders for Nissan LEAF have reached more than 27,000 units globally. The zero-emission car is currently built in Japan, but will also be manufactured in the United States and United Kingdom when new manufacturing facilities there open in late 2012 and early 2013 respectively. Deliveries to individual customers in Japan and the US began in December. In Europe, deliveries will start shortly to Portugal, the Republic of Ireland, the United Kingdom and the Netherlands followed by more markets later in the year.

The Renault-Nissan Alliance aims to be a global leader in zero-emission mobility and is taking a comprehensive approach encompassing both the product and the infrastructure required to support the mass marketing of electric vehicles. To date, the Alliance has entered into more than 90 partnerships with governments, municipal authorities and companies worldwide to prepare the markets and infrastructure for the successful adoption of electric vehicles.

Nissan has won the CoTY award before. In 1993, the Micra became the first Japanese-badged car to win the accolade and started Europe’s love affair with the little car that continues today with the recent launch of the latest generation Micra in late 2010.