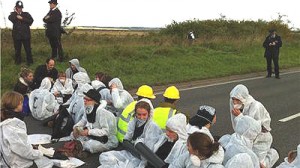 A fuel protest (go-slow) has been re-schedulaed  for Coryton Oil Refinery in Essex this Saturday January 29 due to what the organisers claim was “Police harassment”.

The refinery is the busiest in the United Kingdom providing oil to BP, Shell and Exxon to name a few. By blockading the road,  the protesters believe that fuel distribution be stopped dead. Every tanker that is stopped from exiting prevents 34,000 litres (7,500 gallons) of fuel flowing into London.

This is not not the first time protesters have targeted the refinery. In October 2010 protesters claimed to have stopped 375,000 gallons of fuel from leaving the site.

If you have any further information on this or any other fuel protest 2011 then please contact us.