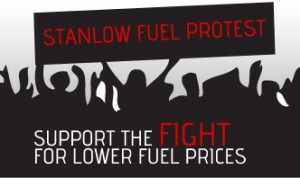 Show your support for the fuel protests!

Our recent article regarding the Stanlow fuel protest has stirred much debate on our comments system and so far popular opinion shows a great deal of support for the planned fuel protests 2011. (Also see our poll)

Today the organisers have confirmed that the fuel protesters will meet on Friday Jan 28th at the Chester Services, 7PM sharp with the go slow beginning at 7.30.

Organisers have also confirmed that the local law enforcement has shown a great deal of interest in the protest. This comes admit speculation that they will use law dating back to 1839 in order to kerb the protests. It has also been suggested that the police have been using intimidation against the organisers in order to keep the protests at bay.

To join the protest or for more information see their Facebook page.