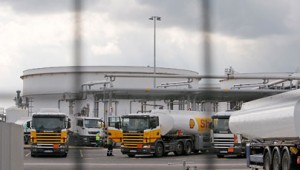 Britain is facing possible petrol shortages after the country’s largest union threatened to call 3,000 fuel tanker drivers out on strike.

Unite, the union behind the British Airways cabin crew strike, has announced a wave of ballots across the industry in a long-running dispute over working conditions and pensions.

This could lead to drivers employed by oil companies, supermarkets and haulage contractors walking out in late February or early March.

“I think it could all take place at the same time,” said Mike Presneill, one of the organisers of the 2007 fuel demonstrations.

The stoppages, which would involve 80 per cent of tanker drivers, could coincide with a fresh wave of fuel protests by independent operators and farmers who have been angered by the soaring cost of diesel.

Earlier this week Mr McLuskey warned that workers across the country were ready to take industrial action against Government spending cuts.

According to Unite, the tanker drivers’ dispute has been triggered by an erosion of working conditions as major supermarkets and oil companies contracted out to haulage firms.

“Tankers drivers play a crucial role in the economy, delivering fuel safely and on time, but their industry, which is worth billions, is content to attack the drivers’ pay, pensions and conditions,” Mr McCluskey said.

“The price of oil is heading for $100 a barrel. This is not an industry suffering like many others: the profits are astronomical. Employers have their heads in the sand, if they think they can continue to attack these drivers’ terms and conditions.

“This is not about pay. Our demands are very reasonable. We are calling for national standards to bring stability to the industry. It would benefit our members but it would also benefit the multitude of contractors in the industry too.”

A spokesman for the UK Petroleum Industry Association said the biggest threat could come from panic buying.

“The impact of a walk-out will depend on the Government’s response and how resilient their emergency plans are.

“As always panic buying is the real problem and often that is what leads to shortages.”

Source and thanks – Telegraph.co.uk