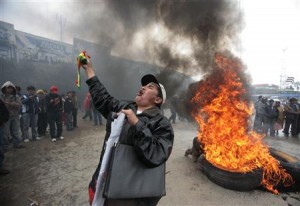 There have been protests across Bolivia after the price of fuel rocketed in the South American country.

Last weekend, the Government announced it could no longer afford to subsidise fuel prices, which had been frozen for six years.

The announcement led to a 73% hike in petrol prices and a leap of 83% in diesel prices.

As well as hitting transport, the increase has also led to a jump in food prices.

Protests in the capital La Paz began peacefully but there were clashes with police when demonstrators tried to enter the main plaza where the government palace is located.

Police used tear gas to disperse the protesters, who hurled stones at officers and government buildings.

In nearby El Alto, demonstrators set fire to a car and toll booths, while there were also protests in the cities of Cochabamba, Santa Cruz, Potosi and Oruro.

The protests have left a total of 15 police officers injured, two of them seriously.

The move has been the most unpopular decision taken during the five-year reign of president Evo Morales. His government has announced measures aimed at offsetting the effects of the fuel rise, including 20% salary rises for public workers and assistance to rice, corn and wheat farmers. However, demonstrators say the moves are not enough and are demanding fuel prices return to their former levels.