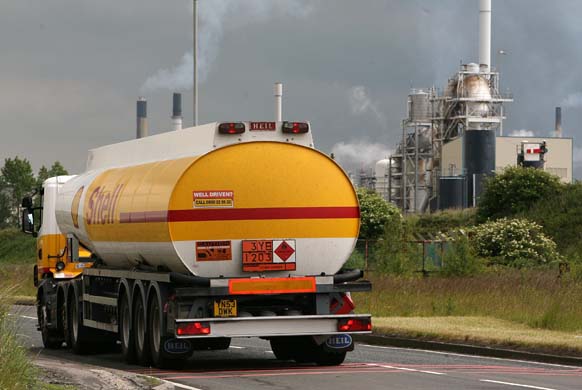 With only 2 days until the Stanlow go-slow and fuel protest, we at Hypermiler.co.uk have compiled some “need to know” facts about the Sunday’s event.

Previous Stanlow protests have centered on blocking the roads around the fuel refinery in order to cause as must disruption to tanker movements as possible. This time round, a go-slow is planned in order to cause traffic chaos on the A55 & M62 as the protestors head to blockade the refinery.

Meeting points are: Llandudno (LL30 1RY) at 12:30PM passing the Rhyl Junction at 1PM. A secondary convoy from Manchester is meeting at Birch Services (OL10 2HQ Westbound) leaving at 1PM.

The organisers have been in contact with the police regarding the go-slow and “offically” the convoy will be travelling at a maxiumum speed of 30MPG in the left hand lane only.

Unofficial reports suggest that protesters plan to use both lanes, we would suggest avoiding any of the routes used if you are not joining the protest.

Early reports simply suggested that as per previous protests, it would be a one night affair. We can now confirm that the blockade is set to last 8 days in order to cause maximum distruption to tanker movements.

Previous events have been low in numbers compared to the expected attendance on Sunday. Estimates range from between 1000 and 5000 people. Numerous organisations and motoring groups from around the UK are planning to join the protest.

The Stanlow fuel protest and Direct Action groups are fighting for one goal, lower fuel prices. In an interview to a local paper, Kevin Bowker said that they are planning a peaceful and responsible protest. “Rising fuel costs are a real problem for everyone, not just drivers. The price of food is going up because it is more expensive to transport it and small businesses are being forced to close down because they can’t afford to run their vehicles”

By blocking tankers from leaving Stanlow Fuel refinery, they hope that the government will take notices and do something about soaring fuel prices. The organisers are also urging motorists to fill up before the event as the blockade may cause fuel shortages at some filling stations.

Grangemouth plant to reopen as dispute is finally resolved