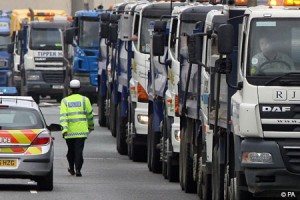 The spectre of trucks blockading streets in protest at record fuel prices – on top of student and public-sector worker demonstrations – will be raised tomorrow when the haulage industry unveils a campaign to force government to halt rises in petrol duty.

The plans, backed by the Freight Transport Association and others, come amid warnings from the AA that recent tax rises, on top of soaring oil prices, are driving motorists off the road and damaging the wider economy.

The price of crude has risen from less than $40 per barrel to more than $90 over the last two years and many are predicting it could break through the $100 mark within months.

Peter Carroll, a trucker and veteran of previous fuel-price protests, said demonstrations were planned, with vehicles on the streets in London in the run-up to the next budget.

“The road haulage industry is being strangled to death by rises in VAT and fuel tax duties and we are working with everyone in the industry and MPs to get government action,” he added.

Ministers raised fuel tax twice in 2010 and a third time earlier this month. Another rise is planned for April. The price of fuel has also been increased by VAT hikes and the rising cost of crude.

“The government can put pressure on Opec to increase the production of oil, as we saw Gordon Brown do in 2008, but it also needs to scrap plans for the April increase of 1p per litre plus the price of inflation. That was conceived before the latest VAT increase and is totally unsustainable,” he added

The AA, which says the average price of diesel has reached £1.32 per litre compared with £1.33 in July 2008, argues that the wider economy risks being damaged because road transport allows trade, and shopping, to flourish.

King says supermarket petrol stations have yet to pass on some of the 3p-per-litre extra costs from the tax rises, and when they do the fuel price will hit record levels, perhaps as soon as this week. “Mondeo man began to protest when the price of petrol just went up every time he went to fill up,” said King. “Most people recognise the wider problems that led to VAT increases but if they are faced with continual tax and fuel price hikes then we could have that 2000 [protest] effect again.”

Carroll and other hauliers involved in previous protests have launched a new campaign group and website, Britishtruckers.com, which is aiming to draw public attention to their plight and put pressure on government to help.

Their concerns appear to be born out by industry website Roadtransport.com, which reports that seven firms have been driven into receivership over the last month alone. SHL Logistics in Crewe, Transport Resourcing of Southampton and JD Hull Haulage of Preston are three of the latest corporate casualties, according to the website.

The price of truck fuel has been steadily rising alongside the value of crude oil on the global energy markets. The average weekly bill for bulk-bought diesel reached 105.97p per litre, not counting VAT, in the week before Christmas, which is 13% higher than it was during the same period of 2009.

That is not far short of record highs seen in 2008, according to the Road Haulage Association.

Tax makes up around 70% of the pump price of diesel but the basic cost is also rising because of the escalating value of the crude oil from which it is produced. Since the start of the new year, oil on global markets has hit 27-month highs of $92 per barrel and City analysts are predicting it is only a matter of time before it breaks through the $100 mark.

Carroll, a former leader of the TransAction truck lobby group, has recently sold his Seymour Transport business, saying he has not got the commercial scale to operate in such difficult trading conditions, while another former leader of TransAction, Mike Presneill, said he knew of “two dozen companies which have gone to the wall” in recent times.

“This is a terrible time for the British haulage industry. Good companies are going out of business suffering from crippling tax and petrol prices and foreign competition,” said the owner of Kent-based Presneill Tipper Contractors.

Britishtruckers.com is arguing that UK firms are more at risk because of competition from abroad with foreign vehicles able to operate in Britain using cheaper fuel picked up on the continent.

While the UK government has direct control over fuel taxes, it has little influence over Opec and the wider forces that shape the global crude price.

Paul Horsnell, head of commodities research at Barclays Capital, said he had increased his average Brent crude price forecast for 2011 to around $91, from $80 in 2010 and $62 in 2009, adding: “I think we are going to see the price above $100 for periods during this year.”

Oil has been driven up by heavy demand in China but also stronger than expected energy needs in the west. Oil companies are struggling to keep up with demand and their capital expenditure has been ramped up by more than 10% for the next 12 months.

The price of crude is most influenced by what happens at Opec, the oil cartel, which as recently as last month decided to hold back output from member countries, which pushes up the value of oil.

The International Energy Agency (IEA) warned last week that Opec needed to change this strategy because oil prices had entered a “dangerous zone” which could derail the global economy.

The criticism launched by Fatih Birol, the chief economist at the IEA, has been relatively isolated so far, compared with the political furore that was kicked up the last time prices rocketed.

That was 2008, when global crude prices hit $147, British truck drivers took their protests to Park Lane in the centre of London and prime minister Gordon Brown went to Saudi Arabia and pleaded for the oil taps to be opened up.

Pressure from Brown and other world leaders did encourage Saudi Arabia and other Opec members to open the floodgates but those producers are now wary because the $147 price was soon followed by a slump to $40 brought about by the collapse of world economic growth.

This time around, the slow pace of the fuel increases has meant the issue has yet to become a major political story. Horsnell, King and especially Carroll all think that is about to change.