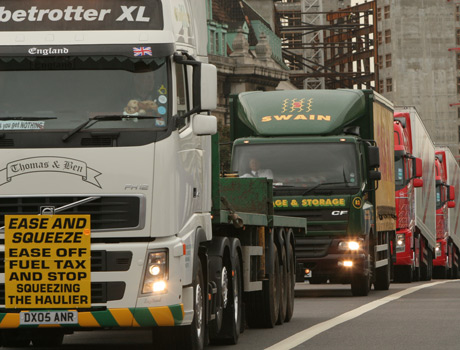 The protests of 2008 where truckers caused road chaos

Haulage  firms are threatening to blockade the roads if fuel taxes continue to rocket.

A survey of firms across the West Midlands has unearthed widespread unrest about the Government’s plans to introduce more petrol and diesel duties.

We dozens of companies with some stating, anonymously, that they would consider a law-breaking blockade if fuel costs continued to soar.

Robbie Thacker, owner of Bedworth Haulage Company in Coventry, said he would back any legal protest – but drew the line at the blockade.

The truck boss, 56, said: “We would be prepared to take part in a legal protest, but we don’t have the freedom to blockade.

‘‘If you take illegal action they can remove your licence. It’s not that I wouldn’t, it’s that I couldn’t.

“But we do know that other people are interested in taking that sort of action.

“I am just a genuine bloke who is trying to earn a living.’’

The last time haulage firms blockaded the roads was in September 2000, when truckers effectively shut down the Stanlow Shell Oil Refinery in Cheshire.

From there, the blockades spread across Britain, bringing some roads to a virtual standstill. The NHS was put on red alert, while there was also panic buying at supermarkets as stocks dwindled.

Pump prices hit record levels on Friday with the average cost of a litre of diesel hitting 133.26p and petrol at 128.6p.

Chancellor George Osborne has hinted in recent days that he is considering freezing duties that are due to increase by another 1p per litre from April. He said: “We can override it. We are looking at that.”

The Fair Fuel UK Campaign is calling for the planned fuel duty rise to be scrapped and for the coalition to look at further ways to stabilise the price of fuel.

The Freight Transport Association (FTA) and the Road Haulage Association are both backing the campaign.

He said: “The logistics sector is about keeping the country running, not grinding it to a halt.

‘‘While blockades and direct action might grab a few headlines, they soon wear thin with the public. By working within Westminster this campaign hopes to exert real influence over the government’s fuel tax policy.”