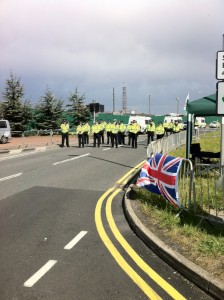 We have had confirmation that the Police at Stanlow fuel refinery have prevented protesters from blockading the facility.

In effect they have blockaded the blockade.

Until not the police presence has been simply to protect the protesters and traffic during the go slow.

We are still waiting for an update from the organisers, we’ll report further updates as we get them.