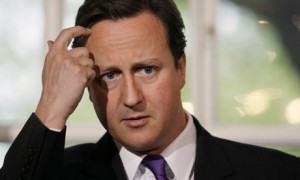 David Cameron has played down the possibility of a “fair fuel stabiliser” to limit fuel duty rises – amid calls from business groups to introduce one.

The PM said he had asked the Treasury to look at the mechanism which would cut fuel duty when oil prices rise and increase it when prices fall.

But he told the BBC: “I don’t want to raise people’s hopes too far because it is a difficult issue.”

The Federation of Small Businesses says the government has “failed to deliver”.

Petrol prices are now at a record high after recent rises in VAT and duty.

The Conservatives promised to look into a “fair fuel stabiliser” in their manifesto and Mr Cameron said last week that he was considering ways to help cash-strapped motorists.

The Federation of Small Businesses (FSB) says the UK now has the second highest diesel price in Europe – something which it says is causing great difficulties for hauliers and other businesses dependent on road transport.

The organisation also points out that on the continent, the total price is split about 50/50 between the cost of the fuel itself and tax.

But in the UK, the average product price is 38% of the total, with the remaining 62% coming from tax.

John Walker, national chairman of the FSB, said they were “severely disappointed” with Mr Cameron.

“In opposition, the Conservative Party promised to put a fuel duty stabiliser in place – something the FSB has been calling for – but they have failed to deliver,” he said.

“As such, they are placing strain on already hard-hit businesses’ cash-flow. It is imperative the government acts now and introduces the stabiliser to avoid a relentless flow of fuel duty increases that simply put small firms on a knife-edge.”

In 2008 when in opposition, the Conservatives proposed a “fair fuel stabiliser” – something criticised by the then Labour government who said it could leave a £3bn hole in public finances.

In the Budget in June, the coalition government said it had asked the Office for Budgetary Responsibility to assess the effect of oil price fluctuations on public finances over the summer before it would “examine options for the design of a fair fuel stabiliser”.

Asked if it was a serious proposal, Mr Cameron told BBC One’s Andrew Marr Show on Sunday: “It is something I have asked the Treasury to look at because when you are filling up the car and it’s £1.30 a litre, it’s incredibly painful for families up and down the country and I understand that.”

He said the rise in fuel duty was part of Labour’s plans and due to the deficit they had not been able to cancel it. But he said there were “difficulties” with a fair fuel stabiliser.

He said: “I think it is worth looking at. I don’t want to raise people’s hopes too far because it is a difficult issue. But the concept that when the oil price rises – and it has risen – if that yields extra revenue to the Treasury is there a way of sharing the burden between the Treasury and the motorist? That’s the idea.”

Labour has accused Mr Cameron, who raised the issue last week, of “reheated promises” on the subject.

Last week Labour’s shadow transport secretary Maria Eagle said: “He’s promised a fuel duty stabiliser before and hasn’t delivered. His warm words won’t mean much to motorists who this week have seen a VAT rise forcing up prices at the pump.”