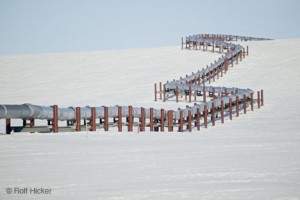 Despite the leak, the AA said the rises were being driven by speculators and ‘pure greed’.

The row came as diesel yesterday broke through £6 a gallon. The average price of petrol was already at a record of 127.8p a litre and heading towards £1.30 a litre following a double whammy tax increase last week.

David Cameron is under pressure to cut the level of duty whenever the pump price becomes excessively high in a so-called fuel-price stabiliser.

AA spokesman Luke Bos-det said: ‘The oil leak in Alaska was not huge. These rises are being driven by pure greed by speculators on the stock market.

‘Not so long ago it might take up to six weeks for an oil price rise to feed its way through to pumps. Now it’s hitting the wholesale price in a matter of days.

The rule of thumb is that every $2 rise in the price of oil adds 1p a litre on to the pump price. So drivers should brace themselves for at least another 1p a litre. At the moment, every day is a new record for petrol.

On American markets, oil prices rose above $89 a barrel on Monday after the 800-mile trans-Alaska pipeline owned by BP and four other firms was shut down.

The pipeline was closed on Saturday after a leak at a pump station. The leak has been contained but there is no immediate time for reopening the pipeline. The pipeline carries about 17% of the US crude output.

Read more about this