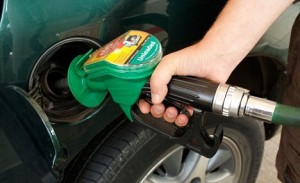 Motorists already paying record prices for petrol at the pumps will face further hikes over the next few days.

Tomorrow’s Government fuel duty rise will put 0.76p on the price of a litre of petrol and diesel. And next Tuesday, January 4, the increase in VAT to 20 per cent will mean pump prices go up once more.

The AA estimates that the two increases will add around 3.5p to the cost of a litre of petrol and diesel. AA figures show that at present, a litre of petrol costs an average of 123.98p a litre, with diesel at 128.20p a litre. This time last year petrol was at 107.74p a litre and diesel at 109.46p. The AA has estimated that British motorists – even before the two latest increases – are spending almost £10million more a day on petrol than this time a year ago.

Professor Stephen Glaister, director of the RAC Foundation, said: ‘It is a bleak mid-winter for motorists with already record petrol prices set to rise significantly with the fuel duty and VAT increases. And that won’t be the end of it with more increases in fuel duty already scheduled for April.

‘Given that each penny increase in fuel duty raises about an extra £500million for the Exchequer, it is easy to see why the Chancellor is tempted to hike rates.

‘But if the nation’s 34million motorists are pushed too far they will drive less and the Treasury could actually see their tax take fall. At the election there was much talk about a fuel duty stabiliser. Drivers will rightly be wondering what happened to that idea.’

The Freight Transport Association said the January 1 fuel duty rise would leave the freight industry ‘with a £95million hangover’.

Simon Chapman, the FTA’s chief economist, added: ‘Diesel is not an optional extra for industry. It is essential to keep shops stocked and businesses supplied with materials.

‘Rises in fuel commodity prices have already left operators facing diesel prices 9p per litre higher than a year ago – adding £3,800 per year to the bill of running an articulated truck.

‘This latest fuel duty increase, together with those previously introduced this year, will add a further £1,200 per year.’

Source and Thanks Dailymail.co.uk