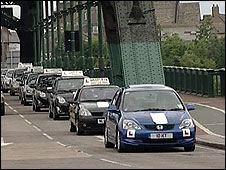 Vehicles ranging from taxis to trucks are expected to bring Sunderland’s busy streets to a halt as protesters fight to drive down rocketing fuel prices.

Driving instructor Paul Jasper will lead a go-slow drive protest through the city centre in a bid to pile pressure on the Government to scrap April’s hike in petrol duty.

Paul was also the driving force against as similar fuel protest back in 2008 where more than 40 vehicles took part in the two-mile “go-slow” from the city’s Roker retail Park to Hendon Docks and crossing the Wearmouth Bridge.

In a statement from Paul, he expressed his concern for small businesses and the public as fuel prices continue to soar.

“We want to get as many small businesses and members of the general public as possible to support the protest and keep the issue of high fuel prises in the spotlight,” he said.

“We are expecting up to, and possibly more than, 100 vehicles to take part.

“There will be driving instructors, taxi, small haulage and bus companies.

“There will also be a demonstration on the Wearmouth Bridge by the general public.

“We are trying to get as many people along as we can. Everybody can make a difference.”

The protestor will be meeting shortly after 10am, Morrison’s car park (Seaburn). The protest will begin at 11am, heading along the seafront towards the Wearmouth Bridge, through St Peter’s, before ending at Hendon Fuel Depot.

If you have any further information about this or any other fuel protests planned for 2011 then please contact us.