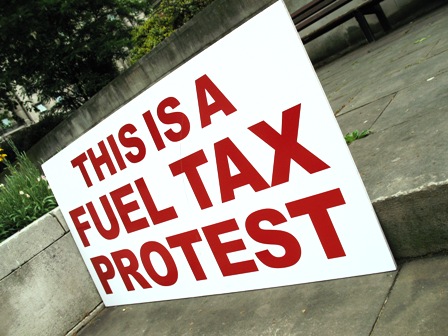 Spiralling fuel prices and the governments drastic cull of public services are the most likely source of protest in Britain, according to an on-line survey by last month for Theos

More than half of the plucky Brits polled (52%) said they were prepared to take action about fuel prices, followed by 47% who said they would protest about axing of public services in areas such as health and libraries.

Social media as a means of protest was most popular amongst 18 to 24-year olds with nearly a quarter of this group saying they had used this as a form of protest over the last year compared with 8% of over 55s. Many of the recent protests in Stanlow and in Essex have used Social networking websites such as Twitter and Facebook to organise the protests, this has helped organisers spread information regarding protests not seen before with other media.

Only 2% said they had taken part in a public demonstration in the last year. But 29% said

The fuel price rise is having knock on effects throughout all transport and travel industries throughout the world. Airlines have had a tough time of late and the recent fuel price increases are set to increase fares and cut profits of the already struggle industry.