Knowing Your Left & Right When Driving In Europe 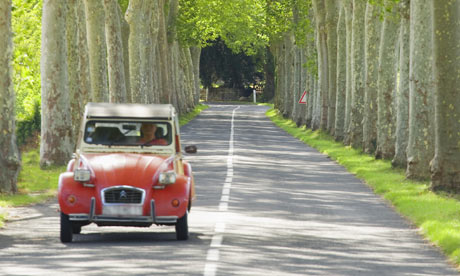 A fun family holiday in Europe. Sun, Sea, and Exploring. A road trip to Prague. A weekend driving in the French countryside. All of these can often turn out to be unexpectedly stressful; the reality of driving a British car on European roads is one of often severely impaired vision. Unsympathetic locals, whose impressive driving skills mean that cars seemingly appearing out of nowhere, and vito vans overtake on the wrong side, add another worry. But do we worry too much?

Figures provided by the Department of Transport show that accidents involving left-hand drive vehicles in Britain are not significantly more common; they are associated with only 0.3% of severities caused by cars. The same is likely to be true for British cars on European roads. In Heavy Goods Vehicles (HGVs), only 9% of the (low) accident count1 were attributed to ‘vehicle blind spot’. The fact that even advanced CPC courses designed to train professional drivers of HGVs, such as the very comprehensive Mercedes Benz CPC driver training, do not incorporate training abroad is illustrative of the very small real risk actually involved in swapping road sides.

Rather than an increased risk of accidents, it is the feeling of insecurity associated with difficult-to-see corners that can make even experienced drivers feel uneasy.

To some extent, a viable alternative to this holiday stress can be the use of rental cars. There are companies who offer six-seat cars and Vito vans, which also allow for the transport of bags and bicycles.

Admittedly, getting behind the wheel of an European car is utterly baffling at first. A certain period of adjustment is required, during which one must digests the fact that everything is, frankly, on the wrong side. After initial confusion, however, it is undeniable that switching to a rental car significantly helps the wrong side of the road situation in Europe. Sitting on the left eradicates blind spots, according to statistics the only manoeuvre actually associated with slightly increased risk.

Mostly, however, driving in Europe is practice. Practice and a relaxed, holiday attitude – nobody wants to be what the Germans call ‘Geisterfahrer’ (directly translated this is a ‘ghost driver’, or an individual who drives going the wrong direction on the autobahn). However, with true German precision, the very visible and obvious road signs make this virtually impossible. An important tip is to remember to look left rather than right first before driving onto a road. Exercising control over that urge to overtake other cars on the autobahn (at those temptingly risky speeds allowed on that side of the channel!) is also usually a good idea.