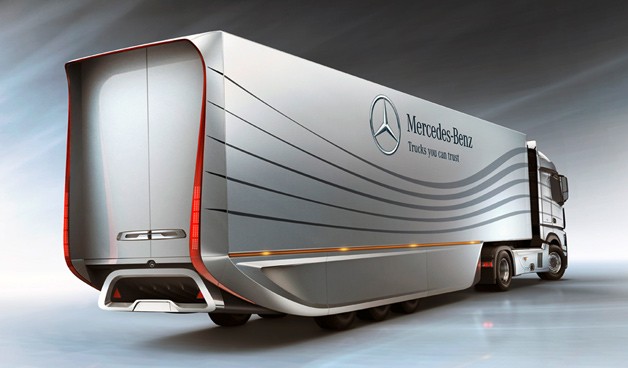 Fuel prices hurt everyone. Fact. But for those businesses that depend on fuel to run their fleets, any increases can have a massive effect on the viability of the organisation, putting jobs and lively hoods at risk.

Mercedes have stepped in to show hauliers what’s possible with an “efficient” trailer design buy maximising the aerodynamic properties of something which is normally just a box with wheels. The streamlined cargo box features a front air dam, side trim panels rear diffuser, and a tapered rear design that adds up to an 18 percent reduction in wind resistance together with a fuel consumption reduction of 5 percent.

Mercedes suggest that a truck averaging over 93k miles or 150,000 kilometers per year will save 2,000 liters of diesel while saving five tons of CO2 emissions.

Read more for the full press release from Mercedes.

Stuttgart/Kortrijk – The wind resistance falls by 18 percent, the fuel consumption by virtually five percent: the design study from Mercedes-Benz goes by the working title “aero trailer” and shows how it is possible to reduce yet further the already low consumption and thus also the CO2 emissions of state-of-the-art trucks such as the new Actros. Mercedes-Benz will be presenting its ideas for the first time on the occasion of the “Trailer 2011” show taking place between 25 and 29 November in Kortrijk, Belgium.

Airdams, trim panels and tapers reduce wind resistance
The aero trailer encompasses the tremendous amount of know-how contributed by the developers and aerodynamicists at Mercedes-Benz. In close cooperation with the Commercial Vehicle Design department they have already succeeded in cutting the wind resistance of the new premium truck, the Mercedes-Benz Actros, bringing it down to 12 to 15 percent lower than that of its predecessor, depending on the model in question.
It is on this basis that the designers have now created a trailer with corresponding properties. Numerous individual measures drastically lower the wind resistance of the entire tractor unit. A front airdam on the trailer reduces the distance to the tractor unit and lowers the wind resistance by one percent. Meanwhile side trim panels contribute an eight-percent improvement. They are slightly drawn-in at the front and characterised by an opening at the rear. This steers the air in the direction of the striking rear diffuser. The diffuser has the shape of a parallelogram and links up with the underbody panelling. This improves the wind resistance by one to two percent.
A rear end taper measuring slightly more than 400 mm in length forms a crucial part of the aerodynamic concept. It features folding elements to facilitate access to the load compartment. The rear end taper improves wind resistance by a further seven percent.

Aero trailer saves 2000 l of diesel and more than five tonnes of CO2 per annum
All in all the aero trailer lowers the wind resistance of the entire semitrailer tractor by approximately 18 percent. In the experience of Mercedes-Benz this results in a reduction in fuel consumption amounting to almost five percent in real-life road traffic. In the case of an average mileage of 150,000 km a year this means a saving of some 2000 l of diesel fuel and relieves the burden on the environment to the tune of over five tonnes of CO2 per annum.
The fundamental feature of the revolutionary aero trailer is to be found in the trailer’s load compartment, whose dimensions remain totally unaffected. The familiar box – measuring 13.6 m in length, 2.55 m in width and with an overall height of four metres – remains available for the freight, just as before. The aero trailer’s only restriction is the fact that its length measurement exceeds the currently permissible limit by almost half a metre, due to the tail-end extension. That said, the handling and manoeuvrability are not in any way compromised by the taper. It is here that changes to legislation are necessary, as in the case of tail lifts and transportable fork-lift trucks, for instance, where exceptions of a similar magnitude are already granted.

Trailer trim saves of 750 l diesel and 2 tonnes of CO2 a year
Intensive tests in the wind tunnel and on the road prove that considerable further consumption progress is possible for semitrailer tractors. By way of example, measurements taken in the wind tunnel at Mercedes-Benz have shown that a side trim panel on the trailer cuts wind resistance by eight percent.
During test drives on the Record Run route this translated into a real-life consumption benefit of some 2 percent for a semitrailer tractor weighing 40 tonnes. In the case of an average annual mileage of 150,000 km in long-distance transport this results in a saving of around 750 l of fuel and relieves the burden on the environment to the tune of approximately 2000 kg of CO2 emissions.

The proof is in the wind tunnel: “boat tail” saves 1000 l of diesel
In addition to this, at the instigation of Mercedes-Benz a working group of truck and trailer manufacturers under the umbrella of the German Association of the Automotive Industry has carried out further tests on the aerodynamics of semitrailer tractors. In the framework of this study, measurements in the wind tunnel at Mercedes-Benz concluded that modifications to the cab such as a supposedly aerodynamic extension result in merely minimal improvements where wind resistance is concerned.

There is much more potential in aerodynamic measures at the tail end of the trailer; a minor extension of the tail end in the form of a “boat tail” brings significant benefits. Four flaps measuring just 400 mm in length and positioned at an angle reduce the wind resistance of the entire semitrailer tractor by nearly ten percent. In arithmetical terms this corresponds to virtually three percent less fuel consumption or more than 1000 l of diesel a year. At the same time it saves the environment over 2600 kg of CO2 emissions. This is also proven by the simulations which have been carried out for the aero trailer.

Future integration of the trailer in telematics systems
As part of its “Truck and Trailer 7plus” initiative Mercedes-Benz is working on further holistic measures aimed at lowering fuel consumption. One of the projects involves the inclusion of information on the trailer’s tyres in the tyre pressure display in the cab of the new Actros.

The FleetBoard subsidiary – which leads the field when it comes to telematics for commercial vehicles – is also currently developing methods of integrating the trailer in its systems. This forms the basis for concrete opportunities for increasing economy and therefore environmental compatibility to an even greater extent. The nearest available suitable trailer for a particular job, the correct allocation of truck and trailer, the transmission of trailer data to the truck’s cockpit – these and other ideas could soon become reality.

Trailer axles from the truck manufacturer, highest service quality
Another idea has already been implemented: since the launch of the first-generation Mercedes-Benz Actros 15 years ago the company has been one of the leading manufacturers of trailer axles in Europe. The unique DCA Airmaster trailer axle is one of its outstanding products: it stores the compressed air for the trailer in the axle housing. This saves the air vessels for the trailer and reduces the weight, and with it fuel consumption and emissions.
TruckWorks is a further example of integrating the trailer in an overall system. More than 80 Mercedes-Benz locations now deal with the entire service for the tractor unit, trailer and bodies, plus their associated components. TruckWorks ensures the same levels of top quality at each location and saves the operators of semitrailer/tractor combinations expense and unnecessary journeys – which in turn means less fuel consumption and reduces the burden on the environment.

New Actros systematically geared towards utmost efficiency
The inclusion of the trailer supplements the already superb economy displayed by the new Mercedes-Benz Actros. It is driven as economically as it is powerfully with a highly sophisticated drive system – perfectly matched to the particular application in question – from a single source. With a view to achieving the utmost efficiency the new Actros spent 2600 hours in the wind tunnel alone, being meticulously optimised – as intensively and carefully as no truck before it. As a result the new Actros is the most frugal and therefore the cleanest truck in its class.

Know-how from over 25 years of research into aerodynamics
There is a long tradition of adopting a holistic approach to the truck and trailer at Mercedes-Benz. Even back in the mid-1980s the development engineers were carrying out in-depth investigations into the aerodynamics of entire vehicle combinations. These involved research into the effect of air deflector panels, side trim panels, edge radii and rear end tapers.

The fundamental knowledge gained back then is still valid to this day and forms the basis for the current investigations. In those days the focus was merely on saving fuel for economic reasons; priority had not yet been given to protecting the environment by reducing CO2 output. Today, some 25 years later, environment relief, conservation of resources and economy represent seamless additions, in the form of the “Truck and Trailer 7plus” initiative.