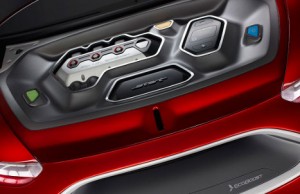 Ford is continuing its green streak by confirming the development of a 1.0-liter EcoBoost three-cylinder engine.

According to the press release the boffins at Dunton Ford technical centre UK have been working on a number of improvements that improve thermal efficency while reducing friction. Other improvements include an offset crankshaft and a split cooling system that allows the cylinder block to warm up before the head, thus improving efficiency when the engine is cold.

The turbo charged Ecoboost range of engines have been adopted in up to 90% of Ford’s 2011 vehicle line up. The forced induction route allows much greater power delivery from smaller engines. In fact this engine is the smalled engine yet from the boys at the blue oval and follows the trend for smaller and more efficient engines as fuel prices around the globe soar.

The mini motor made its European debut in the Ford B-MAX at the Geneva Motor Show this year, further details will be released in September at the Frankfurt Motor Show in Germany.

Read more to see the entire press release from Ford

DEARBORN, Mich., June 2, 2011 – Ford is expanding its industry-leading range of fuel-efficient powertrains in North America with the addition of a new 1.0-liter EcoBoost™ three-cylinder – the smallest engine Ford has ever built – and an all-new eight-speed automatic transmission.

In addition, Ford’s next generation of hybrid vehicles, including a new plug-in hybrid that will launch next year, will have a Ford-engineered transmission that will be built in Michigan.

The arrival of the latest member of the EcoBoost family, Ford’s first eight-speed automatic and its new hybrid transmission will further strengthen the company’s lineup of fuel-efficient vehicles. Today, Ford Motor Company has 12 vehicles that lead their sales segments in fuel economy and four vehicles that deliver at least 40 mpg, a lineup no other automaker can match.

“In the last five years, we have made a record investment in new powertrains and fuel-saving technologies,” said Derrick Kuzak, Ford group vice president of Global Product Development. “Today, we have the freshest powertrain lineup in the industry. And there is plenty more coming.”

1.0-liter EcoBoost: Ford’s smallest engine yet
Engineers at Ford’s Dunton Technical Centre in the U.K. began designing the new EcoBoost 1.0-liter engine long before the current spike in fuel prices pushed the cost of a gallon of gas over $4. Their goal: To design a technically advanced, super-efficient three-cylinder engine that delivers the same performance as a four-cylinder, but with much higher fuel economy and lower emissions.

To do that, engineers at Dunton, Ford’s global center of excellence for small-capacity engines, focused on improving thermal efficiency and reducing friction of the engine’s internal moving parts, especially during warm-up. That’s when an engine emits higher levels of CO2 and other pollutants. The new engine introduces many new technologies that could someday be part of the DNA of future Ford engines, said Joe Bakaj, Ford vice president of Global Powertrain Engineering.

The new three-cylinder engine will be available globally in the company’s small cars. It will also play an important role in North America.

“Consumers are telling us they want to buy affordable vehicles that get many more miles per gallon,” said Kuzak. “Our new 1.0-liter EcoBoost engine will give consumers looking for hybrid-like fuel economy a new, more affordable choice.”

Final calibrations of the new EcoBoost 1.0-liter are under way. Kuzak said the new engine will deliver horsepower and torque outputs equivalent to or better than most normally aspirated 1.6-liter gasoline engines.

“The 1.0-liter engine is a little dynamo,” Kuzak said.

Technology powerhouse
Bakaj said the new 1.0-liter EcoBoost might be small in size, but it’s big on advanced technology.

An offset crankshaft that helps improve fuel economy
An advanced, Ford-designed split cooling system that allows the cylinder block to warm up before the cylinder head. Faster cylinder block warm-ups save fuel, especially in cold weather
An exhaust manifold cast into the cylinder head. The one-piece assembly lowers the temperature of the exhaust gases. This enables the engine to run in a wider rpm band with the optimum fuel-to-air ratio. The new design also saves weight and allows the engine to operate more smoothly
EcoBoost technologies, such as turbocharging, direct injection and twin independent variable camshaft timing (Ti-VCT)
“No one’s ever built a three-cylinder engine quite like this. Not only is it one of the most technically advanced and efficient engines we’ve ever designed, but it will introduce a number of new technologies to the Ford engine lineup,” said Bakaj.

For comparison, the newest member of Ford’s global EcoBoost engine family has about the same displacement as a cruiser motorcycle. Ford has never built a regular production car engine with fewer than four cylinders.

“Drivers are going to like the new 1.0-liter EcoBoost engine for many of the same reasons the EcoBoost F-150 is such a big hit,” said Bakaj. “It will deliver great low-speed responsiveness, power, torque and smoothness.”

First seen in the Ford Start concept car that debuted at Beijing in 2010, the engine more recently made its European debut in the Ford B-MAX at the 2011 Geneva Motor Show. More technical and application details for the new 1.0-liter EcoBoost engine will be released in September at the Frankfurt Motor Show in Germany.

Ford’s EcoBoost commitment
Ford is on track to deliver on its promise in 2006 of offering EcoBoost on 90 percent of its North American lineup by 2013 and to be producing 1.5 million EcoBoost engines globally. The next vehicles to get EcoBoost engines, Edge and Explorer, arrive late this summer.

“With our global family of EcoBoost engines, we’ve replaced V8s with V6s and V6s with four-cylinders – with no loss of performance and with impressive fuel economy improvements,” Kuzak said. “The new 1.0-liter EcoBoost engine will come in at the lower end of the global range and will take the place of a four-cylinder engine, again with no loss of performance or refinement. Above all, drivers win because this new engine is specifically designed and engineered for terrific fuel economy.”

Like the 1.0-liter EcoBoost engine, advanced technology will be a key feature of the new Ford-designed, Ford-engineered and Ford-built eight-speed automatic currently under development, Bakaj said. “The new gearbox will be the first with a number of advanced new technologies that will provide faster, smoother and more positive shifts,” he said.

The eight-speed transmission will feature:

Ford’s next-generation clutch controls
An input torque sensor, which measures torque coming into the transmission. The sensor enables faster selection of the proper gear, reduces hunting and helps smooth out shifts
Actuators built into the case for tighter, more precise control of hydraulic pressure
Closed-loop control
More details on production and applications will be released at a later date.

In-house hybrid transmission
Another new Ford transmission, to be installed in hybrid vehicles, starts production late this year at Van Dyke Transmission Plant in suburban Detroit. Full volume production is slated for the first quarter of 2012.

By next spring, Ford expects to be manufacturing more hybrid transmissions in North America than any other automaker or supplier. The new transmission replaces a unit currently made in Japan that is used today in Ford and Lincoln hybrids.

Within the last year, Ford has invested $135 million to design, engineer and manufacture key components for its expanding lineup of hybrid, plug-in hybrid and battery electric vehicles. The investment not only brings in-house battery and hybrid transmission production, it also has created at least 220 jobs in Michigan.

“It’s absolutely essential for Ford to further develop its core competencies in engineering electrified powertrains,” Kuzak said. “With this new Ford-built hybrid transmission, and assembly of battery packs at our Rawsonville plant, Ford will be positioned well to meet the quality and performance requirements of future electric and hybrid vehicles.”