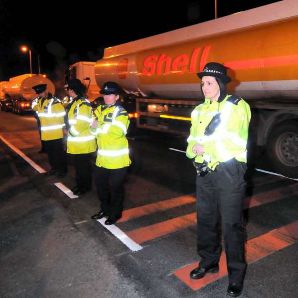 In a recent press release the Stanlow Direction Action group has confirmed that they have organised a traffic “go slow” for this Saturday 11th June . In a departure from recent fuel protests and events in Chester, this protest is aimed at causing disruption in the centre of Chester.

“Our Chester ‘Go Slow’ of which has been set for June the 11th 2011 will be taking place as scheduled, of which will depart Broughton Retail Park, Chester Road, Broughton at 12.00 and will head in to Saltney Ferry with the plan of arriving into Chester City Centre at 13.30 of which an option to continue to Stanlow Refinery will be offered.”

I have been a keen supporter of the Chester fuel protests, however this event is clearly targeted at causing disruption in the heart of the city. Such event is likely to cause misery for shoppers in the centre as well as harming businesses already struggling with fuel costs and the poor state of our economy.

I will continue to report on this weekend’s protest however this type of unproductive protest is likely to harm the group’s support from motorists and press alike. I would also like to point out that the Stanlow Fuel protest group (headed by Kevin Bowker and others) is not associated with the Stanlow direct action group in any way.