When What Car announced the 2014 green car of the year we really didn’t expect the BMW’s flagship EV to secure the top honors, especially when you consider that the first examples are only just landing on customer’s drive ways. Could the i3 be everything we hoped of from an electric car? Thanks to BMW we’ve had some first hand experience with the i3.

The new BMW i3 made its production début in July 2013 amidst a wave of media coverage. Originally hailed as a “Mega City Vehicle”, it was clear to see that it had changed very little since hitting the scene in its concept car guise two years previously.

Peeling back the futuristic carbon fibre body shell reveals BMW’s proven and familiar rear wheel drive configuration, digging deeper unveils technology not seen in any other BMW to this day.

Rather than the diesel lump usually reserved for its fleet, the i3 utilises a 168BHP electric motor that propels the car to 60 from a standstill in an impressive 7.9 seconds (with REx) or 7.2 without the range extender.

Comparing it to other electric vehicles on the UK market, the i3 could be classed as the “hot hatch” of the battery powered world, outperforming the elderly Leaf by an impressive 4 seconds to 60. Impressively the i3 is on par with the likes of the 120i and 120d, proving that there is little compromise in the performance stakes (up to the national speed limit).

We were a little concerned when BMW suggested that one of the i3 “geniuses” should take us out on a demo run before letting us loose with the car, could or should it really be that different?

Gladly the answer to that is a defiant no. Other than the rather aggressive regenerative braking system, the i3 performs much like you would come expect from any other BMW vehicle. The steering is extremely precise, and somewhat “darty” giving you confidence in the car’s ability and handling. In fact combined with the impressive performance of the car, it could be described as somewhat sporty.

The i3 has 3 driving modes which help you either get the most from the car’s relentless torque or the best range from the power cell. In “comfort” mode you can make the most of the power on tap. It’s rather breathtaking how urgent the car feels with so much torque from a standstill, it’s even more impressive that it’s all done in near silence.

The other modes “Eco” and “Eco Plus” are available to maximize the range of the i3. The latter of the settings disables the climate control and other energy hungry features while semi restricting top speed to 56MPH. Even in the eco modes the i3 remained a joy to drive, helping us focus on maximizing the range.

Our demo car was equipped with what BMW call REx. The REx ( short for Range Extender) is a 650cc BMW motorbike engine, neatly tucked away in the rear of the car. The on board generator can be used in two ways. Below 75% battery it can be used to sustain the power in the battery, while at below 20% it starts automatically. Its a very clever system that is hardly audible even when stationary.

With the REx installed BMW claim that it should double the car’s range to 200 miles. This makes even the longest commute a possibility with the i3. Its an impressive feat especially considering there’s only capacity for 9 litres of unleaded fuel.

BMW have gone to great lengths to keep the i3’s mass to a minimum. The i3’s body shell (life pod) is constructed completely from carbon fibre helping to keep the i3’s total weight down to around 1200kg. It’s low weight helps maximise range, increase performance and improve the handling. Even with our relatively brief time with the i3, it performed as well as any other BMW I have driven, even over the bumpy back roads of Stamford. The EV was keen to push forward without being unsettled through the bends.

The interior of the i3 was one of the standout features for us. It’s light and roomy cabin makes it feel a much bigger car than it actually is. Even with my entire young family on board it remained uncluttered and surprisingly roomy. The rigid carbon fibre shell helps minimize pillars making it a joy to occupy while the door configuration had my son in awe.

The instrument panels have been replaced by what looks like a premium tablet running the familiar BMW iDrive interface. Even with the huge array of options and screens we found it easy to navigate and a great tool to help you monitor and manage your power usage.

How economical is it?

After out trip of just 41 miles the BMW i3 iDrive measured our battery usage at just 17.2kw / 100 km. In real money terms that’s just over £2.01 (17.2 x £0.117) for 62 miles or the equivalent of 193 mpg. Even with some “enthusiastic” bursts of driving it’s proved to be epicly economical. We’d expect to improved that figure somewhat more with some more time behind the wheel and a few more miles of city driving. 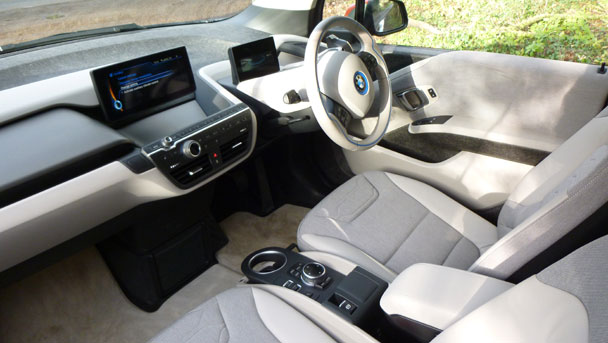 Our demo car came in at an eye watering £38k on the road. Admittedly it’s equipped with many options that might not be high on your list such as the ridiculously large 20 inch wheels.

Before you put back your cheque book, BMW have finance deals starting at just £369 a month which isn’t beyond the grasp of many new car buyers.

Compared to the other EVs we have driven, the i3 is in a class of its own. We were taken aback by the urgency of its acceleration, even at higher speeds. It oozes quality and it’s screwed together with the car and attention to detail we have come to expect and demand from a prestige marque such as BMW.

They really have succeeded in making electric car ownership a viable and tempting option. Yes its a little pricey compared to the likes of the Leaf but you really do get a lot more for your money.

We would like to thank the kind folk at Sycamore BMW Peterborough, their technical knowledge and passion for the i3 made driving the car an experience in itself. It’s easy to see why they have been so successful in securing 10 happy homes for i3’s .

Please also check out the Sycamore BMW website for more information on this and other cars in the BMW range.

Please enjoy these rather nice shots of the i3 taken in and around the picturesque town of Stamford.