DIY DPF delete / Removal… can you really do it yourself? 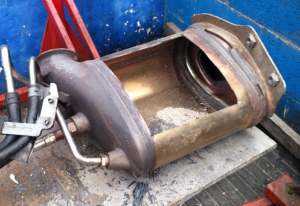 DIY DPF removal. Can you really do it yourself? It’s a question we get daily from disgruntled owners faced with a dealership DPF replacement/regeneration quotes, often of the four-digit variety.

So can you tackle this job yourself and replace/remove the DPF filter once and for all? Before we answer this, let’s think about what’s involved.

Yes, a DPF filter itself is a simple thing. A box with a honeycomb filter/mesh which stops/traps larger diesel exhaust particulates (soot) but allows the follow of normal exhaust gasses. What isn’t so simple are the sensors and ECU management which keep this system in check. Your car’s ECU is constantly monitoring the DPF sensors, checking back pressure and ensuring that it’s working correctly. In the event of a blockage / or high loading, it will trigger a DPF regeneration until sensors reach nominal levels. To complicate things further there are some systems which utilise ELOYS  to reduce the temperature at which the soot can be “burnt off” the DPF.

Physically removing the DPF typically isn’t what many would call a huge job. Some cars are harder than others but at the end of the day, it’s a serviceable exhaust component. Typically it should unbolt from the exhaust, however, on some vehicles, it requires a lot of jiggery-pokery depending on its location and in extreme cases the removal of the front subframe.

Once removed, the DPF is essentially just a filter. These are often simply cut open along the welded seams, drilled out and rewelded back again. Sounds simple!

What isn’t fun and games is the electronics required to keep the car’s ECU happy that the DPF is working as expected. Our investigations have shown that some owners opt for adding resistors to the DPF sensors to try and trick the ECU in accepting false reading from the sensors, however, we’ve struggled to find a common solution at fits all cars.

Most drivers will opt for an ECU remap which removes the DPF system from the ECU entirely. This prevents the need for tricking the sensors as effectively the ECU no longer has any DPF control systems to worry about.

Is DIY the answer?

If you’re competent under a car with a set of spanners, there’s nothing stopping the would-be DIYer from taking the DPF off their car, A few cuts, DPF internal gutting, and a competent weld up just might be enough to hide your illegal actions from your local MOT tester but ultimately, it’ll be the ECU which will cause the biggest headache. Without the ability to remove the DPF from the ECU, you’ll be no better than you started, with DPF sensor readings rendering your vehicle in limp home mode for eternity.

Unless you’re a dab hand at  ECU reprogramming, your only answer will be a remap which includes a DPF removal. Commonly, this offers a performance boost and removal of the DPF system from your car’s brain. “Great” I hear you say, but these often carry a price tag of at least £400 for removal by a reputable tuner.

You could opt to send your DPF to one of the many DPF cleaning companies who can remove the Ash buildup from the filter using fancy machines. They use specialist chemicals and extreme pressure in order to remove the Ash, not something you can do with a jet wash. Before you ask, Teraclean or one of the other carbon cleaning specialists CAN NOT do this by spraying sea foam through your inlet and running a “magic” DPF regen with a laptop.

So is it worth it?

Depending on your level of skills with the spanners, you might actually be better of replacing the DPF with an OEM unit from a supplier which specialises in “compatible” DPF filters. These often cost less than half that of a dealer supplied unit and could be fitted at home if you’re competent.

With the market for DPFs increasing due to an increased customer base of aging vehicles with DPFs fitted, the cost of DPF replacements is slowing coming down. Is it really worth the hassle, expense, and the police/insurance scrutiny should you be caught with a “modified” DPF on the road?

What would we recommend

Sat here on my high horse, it’s easy to say don’t run the risk of being caught with your DPF illegally removed. It isn’t worth the hassle, risk and expense should you be caught in an unfortunate accident. However, when presented with a bill for £1200 from a dealership or £500 for a DPF removal, I’m not sure I could take the high road on this one.

It’s a tricky situation and whichever road you take you’ll never escape the curse of the DPF whilst you still fill up from the diesel pump.

Have you managed a complete DIY DPF removal, have you been stung with a huge DPF repair bill or been caught out by having your legally removed? Let us know in the comments below

How to use a manual DPF regeneration button / switch FAQ