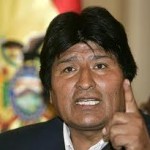 Bolivian President Evo Morales has rescinded a decree issued less than a week ago that raised fuel prices by more than 70 per cent and led to civil unrest.

The government withdrew its heavy subsidies on gasoline and diesel fuel, saying it could no longer afford them and that much of the cheap fuel was being smuggled out of Bolivia for profit.

The prices had been frozen for six years, and Vice-President Alvaro Garcia Linera said the state was paying $380 million US a year to subsidize gasoline imports.

The decree issued last Sunday triggered the steepest increases in fuel prices in 20 years and was met with widespread resistance.

Transport workers launched what they said would be an indefinite strike and army trucks had to be used to supply bread following a strike by bakers.

Morales on Friday said there was no justification for raising transport fares or food prices right now, and that he was answering the wishes of the people by rescinding the decree.

He made the announcement in a televised address, about 90 minutes before midnight.