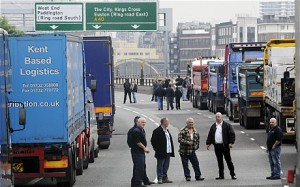 Britain faces the prospect of a fresh wave of fuel protests after campaigners and MPs condemned new tax rises that will see the price of petrol increase by more than 3p a litre this week.

A campaign group of farmers and hauliers which was behind the fuel blockades a decade ago has threatened new action against the rises, while a cross-party group of MPs has called for the Government to help motorists and essential road users by cutting fuel duty.

The Scottish and Welsh Assembly governments have also joined calls for a cut in duty.

The combination of both tax hikes will put around 3.5p on the average cost of a litre of unleaded petrol, which had already hit a record high of 124.16p last week – more than 14 per cent on a year ago.

Diesel stood at an average of 128.35p a litre. Further increases in fuel duties are planned in April.

Farmers, road haulage operators and cab drivers have been holding meetings to discuss ways of reviving their campaign of direct action in the face of the record pump prices.

Proposals under discussion include a return to the tactics deployed in 2000 and 2005 when blockades and demonstrations at refineries caused widespread disruption and panic buying.

David Handley, a veteran of the earlier protests, said: “The cost of fuel which sparked the protests in 2000 pales in comparison to what it is now.”

An early day motion submitted by David Morris, the Conservative MP for Morecambe and Lunesdale, and a number of Labour MPs, argues that “fuel price reductions will help the economy and give much needed respite to the hard-pressed haulage industry”.

Mr Morris said: “Something needs to be done to kick start the economy and cutting fuel duty would be one measure that would help.”

Wales’ rural affairs minister Elin Jones added: “The rises in VAT and fuel duty are further measures brought in by the Tory/Lib Dem coalition which will increase pressure on Welsh businesses, particularly in the farming and haulage sectors.

“People are rightly asking why the recovery is being stifled by the UK government’s short-sighted actions. Fuel pricing in rural areas continues to be an utter scandal. This tax hike will only make that situation worse.”

A Scottish government spokesman added: “Action is needed to deal with the impact of rising petrol prices.

“The introduction of a fuel duty regulator by the UK Government would enable any extra tax raised through higher petrol prices to be used to fund a fuel duty cut.

“We also believe a discount on fuel duty should be levied in rural and island communities, two areas hardest hit by rising fuel prices.”

The Road Haulage Association also called for a reduction in fuel duties.

Kate Gibbs, its director of communications, said: “We are seeing the price of fuel rocketing to unprecedented levels and there’s a limit to how long these increases in duty can be borne by the road haulage industry.

“Fuel duty has to be reduced not increased, in order to go some way towards giving us a level playing field with the rest of Europe, who pay far lower costs.”

Whitehall sources pointed out that fuel duty remains 10 per cent lower in real terms compared to its peak in 2000 and that hauliers can reclaim VAT on fuel.

A HM Treasury spokesperson said: “In order to address the country’s record budget deficit, it is necessary to implement the fuel duty increases already set and legislated for.