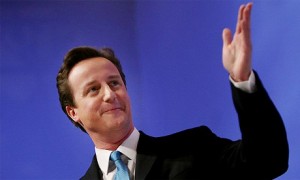 David Cameron today breathed new life into longstanding Conservative plans to rein back escalating fuel prices by saying he was working with the Treasury on a “fair fuel stabiliser” aimed at keeping fuel duty down when oil prices rise.

He said the joint impact of increases in duty and VAT meant things were “very painful and difficult”, and he would love to do something to minimise the impact.

Many thought the plan for a fuel stabiliser was not workable following an effective thumbs-down by the Office of Budget Responsibility (OBR) in September.

However, Cameron revived the proposal at a challenging Prime Minister Direct event in Leicester where he was tackled on the impact of fuel prices at the pump reaching £1.30 a litre or more. He said: “I am working with the Treasury on this. Is there a way in which when the oil price goes up and the Treasury is getting more revenue out of oil we can find a way of sharing the risk with the consumer?

“If the price goes up, the tax comes down, and if the price comes down the tax goes up. We’re looking at that … It’s not an easy thing to put in place, but I would love to find some way of sharing the risk of higher fuel prices with the consumer, because at the moment I think they feel they are sharing all of the burden.”

The political danger for Cameron is that he will be accused of proposing a policy response that is known to be unworkable in the face of the political pressure caused by the new year double whammy of rising fuel taxes and higher VAT.

In opposition in 2008, George Osborne raised the idea of a fuel duty stabiliser, and he announced in the June 2010 budget that he had given the OBR the task of working out whether higher oil prices increased the public tax take, and so made it possible to fund a stabiliser.

But the OBR report appeared to provide little support for the plan, arguing that public finances were little affected by oscillating fuel prices.

Elsewhere in the question and answer session the prime minister again called on the banks to do more to supply funds to small businesses and to individuals seeking a mortgage, saying he was deeply concerned that people whose incomes justified a mortgage were being refused. Part of the reason for the credit crunch had been that banks had been handing out mortgages worth 120% of of the property.

“People were moving into houses that they could not afford and were getting into negative equity. But in a way the pendulum has moved too far the other way. We have got to get proper lending back,” he said.

Source and Thanks Guardian.co.uk