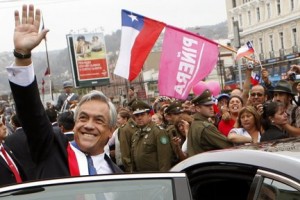 As Chile imports the vast majority of the fuel it consumes and transportation and fuel prices have a heavy weighting on the consumer price index, international market volatility can shake the domestic economy.

The proposed mechanism, which carries the acronym Sipco and has a variable fuel-tax component that will reduce taxes if prices climb above a certain point, was unanimously approved in the lower house earlier Wednesday.

“Chilean consumers can rest assured that if there are sharp price hikes for international fuel prices, they will be in part mitigated by this new mechanism,” Finance Minister Felipe Larrain said.

A recently expired mechanism, a fuel price-stabilization fund that subsidized diesel and gasoline prices if they increased above a certain range, operated like a price band for imported fuels. In that mechanism, which expired June 30, if the import price was higher than the maximum price set by the band, the government credited the difference.

“This new mechanism is better than the previous one. The mechanism we had during the [last] decade cost the state $2.34 billion. The one which was approved today will protect consumers and cost the state far less,” Larrain said.

Thanks and Source Wall Street Journal

RAC predicts fuel prices to crash as low as 86p