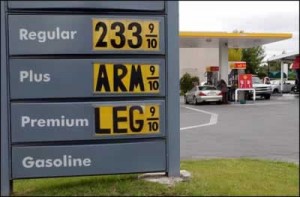 Fuel prices set to rise, fuel duty will be the nail in the coffin

Motorists’ pockets will be hit even harder this year as petrol retailers predict the average cost of filling up a tank could soar to £70.

Planned government tax rises could see a litre of unleaded rocket to £1.36, while diesel could go up to £1.40.

Representatives from major motoring organisations are urging Chancellor George Osborne to scrap plans for a 5p rise in fuel duty in his April budget.

Already hard-hit families could face a total rise of 8p per litre at the pumps as oil prices also continue to increase.

Brian Madderson, chairman of the Retail Motor Industry Federation’s petrol division (RMI), has written an open letter to Mr Osborne calling for him to “halt the relentless rise in fuel prices“.

Mr Madderson said: “Our unequivocal recommendation is that the Government now abandon the fuel duty`escalator’ principle as this is a legacy of your predecessors.

“We are mindful that the plan to increase duty yet again by 1p a litre in ‘real terms’ from April 1 will add a further 4-5p a litre to the retail price at the pumps for all grades of fuel.”

Mr Madderson’s plea is echoed by commuters and small businesses who are demanding action from ministers.

Campaigners say people will be unable to travel to work and businesses will suffer financially following the fuel hikes.

Elspeth Connolly, of Internet Unlimited LLC, told Sky News Online: “Some staff have been unable to come into work by car.

“People are really considering where they drive.”

Motorists in West London say their day-to-day lives have been affected.

Merle Goll, 35, a designer from Twickenham, said: “It keeps you from making the short journey and this is something that we have had to cut down on.

“They’re incredibly high, ten years ago I remember prices of petrol being around 68p a litre.”

Kuluindesr Singh, 40, from Southall, told Sky News Online: “This time of the year prices have gone very high. Before, the money I was paying for a full tank now only equates to half a tank of fuel.”

The Government is now facing calls to introduce their fair fuel price stabiliser policy, which would see fuel duty fall when oil prices rise, and then go back up when they moderate.

The policy was shelved after the coalition was formed.

John Walker, national chairman of the Federation of Small Businesses, said: “In opposition, the Conservative Party promised to put a fuel duty stabiliser in place – something the FSB has been calling for. But they have failed to deliver.

“As such, they are placing strain on already hard-hit businesses cash-flow. It is imperative the Government acts now and introduces the stabiliser to avoid a relentless flow of fuel duty increases that simply put small firms on a knife edge.”

Some activists have called for a repeat of the crippling fuel strikes of 2000, when farmers and lorry drivers staged go-slow protests and refinery blockades that bled dry more than 90% of UK petrol stations – all because prices had gone above 80p a litre.

David Handley, chairman of Farmers For Action (FFA), who was part of the protest said: “I can see a fuel protest happening again very imminently and if it does, we will support them without a doubt.

“It is an unfair situation on the general public and they will be making a poor return on the money they pay for fuel.”

Reports had suggested that Unite General Secretary Len McCluskey would back a strike, but a spokesperson for the union dismissed them as “rubbish”.

Traffic on the M6 motorway in Cheshire as people make their way home for the Christmas holidays on December 23, 2010.

Most fuel supplies are distributed by haulage contractors, who not only tender for the work, but also negotiate separate wage and condition deals with their drivers.

The Road Haulage Association (RHA) says the increase in petrol pump rises are “financially crippling” the way the association delivers its policies and looks after its members.

But it ruled out organising a strike, pointing out that new legislation allowed drivers’ operators licences to be confiscated for taking part.

An HM Treasury spokesperson said: “In order to address the country’s record budget deficit, it is necessary to implement the fuel duty increases already set and legislated for.

RAC predicts fuel prices to crash as low as 86p