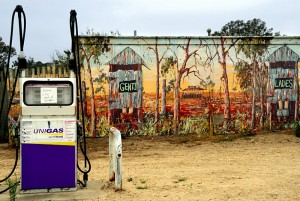 rural petrol stations to be a thing of the past?

Petrol stations in rural areas will be a thing of the past by the end of the decade because soaring fuel prices will have forced them out of business, a leading motor industry body has predicted.

He predicted that 500 petrol retailers – the bulk of whom were in rural areas – would go out of business in the next 12 months with the loss of about 5,000 jobs because they cannot afford to match supermarket prices.

This trend will continue as long as petrol prices continued to soar, he said.

Madderson said that there had been a “noticeable trend” in country areas of motorists prepared to ignore their local garage and drive up to 30 miles to get cheaper petrol from supermarkets or large petrol chains in or near towns.

His comments were yesterday supported by rural garage owners in the Westcountry who say they have become “an endangered species.”

Mr Madderson said: “I fear the whole refuelling network in this country is now under threat.

“By the end of the decade there will be no retail petrol stations in country areas. Already some of our members are reporting a ten to 20 per cent reduction in business.”

Charles Richards, whose family have run the Jet Garage in St Blazey, Cornwall, for 30 years, said there has been a “huge decline” recently.

“What’s happening is that as the price goes up, people are becoming more price conscious and are going to larger garages. Around here Asda, Morrisons and Tesco are taking up most of the local trade,” he said.

“Privately owned, independent rural petrol stations are a dying breed – an endangered species. If customers do not support local garages there will no longer be that level of choice, people will have to drive further for fuel and there will be less price competition. It is simply not in the public’s interest.”

Mr Richards said that the past 12 months, which saw catastrophic flooding and two unusually cold and snowy periods, has been the sharpest decline for them.

He added that they have had to diversify – with a shop and car wash – to ensure they stay afloat.

The Government has been urged to scrap planned fuel duty rises amid fears that prices at the pumps could reach 140p a litre by April.

The next automatic ‘escalator’ rise in fuel duty is due on April 1. In a letter to the Chancellor, George Osborne, Mr Madderson said that average petrol prices were already at 128p a litre with diesel close to its record high of 133p a litre.