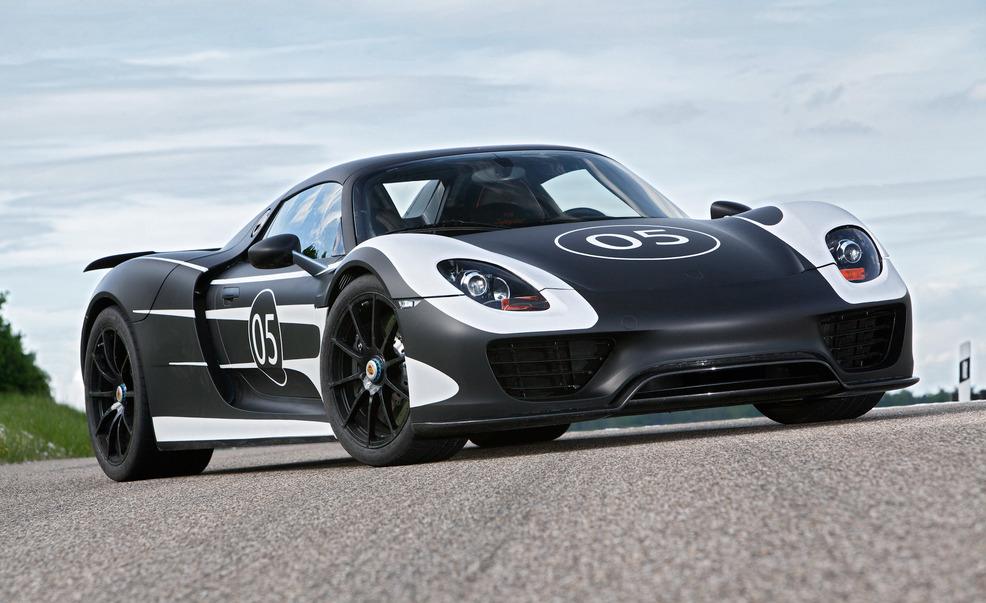 First a Porsche pop out a diesel variant of its “marmite” Panamera capable of returning a combined 43.5 mpg and now this!

Behold the Porshe 918 Spyder Hybrid Prototype, on paper its a mighty impressive and exclusive super car. With a top speed of 199mph and packing a whopping 770 hp who could ask for more, well how about 78MPG?

The 918 Spyder will come in the form of a plug-in hybrid much like the Toyota Prius. It will feature a 500 horsepower 4.0-liter V8 engine and two electric motors, all three power plants will help propel the Eco rocket to 62 miles an hour in a Prius slapping 3.1 seconds. Don’t expect it to come cheap, Porsche has confirmed it will come with a $845,000 price tag.

Production of the 918 will commence next year with deliveries being made by the end of 2013. That’ll give me a couple of years to save! Where do I sign?!

Read more for the full press release from Porsche

Stuttgart. The Porsche 918 Spyder is on the road: Dr. Ing. h.c. F. Porsche AG, Stuttgart, has taken the driving trials of the super sports car of the future a step further with completion of the initial prototypes. The 918 Spyder will go into production at the end of September 2013 as planned, with the first customers receiving their vehicles before 2013 is out. “What we are doing with the 918 Spyder is redefining driving fun, efficiency and performance,” said Wolfgang Hatz, Member of the Executive Board Research and Development of Porsche AG.

The prototypes, their camouflage harking back to historical Porsche 917 racing cars, signal the final touches to the 918 Spyder. The focus is on the interplay between the highly sophisticated individual drive components. The combination of combustion engine and two independent electric motors – one on the front axle and one in the drive line, acting on the rear wheels – poses completely new demands on the development of the operating strategies. “They are therefore a critical component in this vehicle into which we have put all of our expertise and capacity for innovation,” said Wolfgang Hatz. These operating strategies and the development of the software to go with them are one of Porsche’s core competences. Both of them have a major influence on the extreme driving fun to be had with the 918 Spyder and they make possible a unique combination of minimal fuel consumption and maximum performance. The initial results of the driving trials are in line with the high expectations placed on the 918 Spyder.

The super sports car is designed as a plug-in hybrid vehicle combining a high-performance combustion engine with cutting-edge electric motors for extraordinary performance: on the one hand, the dynamics of a racing machine boasting more than 770 hp, on the other hand, fuel consumption in the region of three litres per 100 kilometres. Moreover, Porsche is breaking yet more new ground with the technology demonstrator with spectacular solutions such as the full carbon fibre reinforced plastic (CFRP) monocoque with unit carrier, fully adaptive aerodynamics, adaptive rear-axle steering and the upward-venting “top pipes” exhaust system. In the process, the 918 Spyder is offering a glimpse of what Porsche Intelligent Performance may be capable of in future.