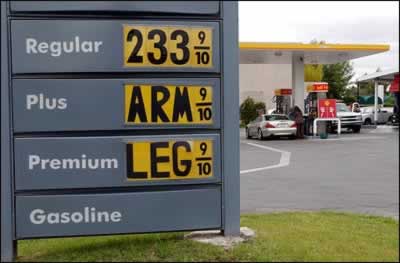 Fuel retailers have been accused of failing to pass on a drop in fuel prices to customers.

The average wholesale price for petrol has fallen by 2p since January 11 from 41p to just over 39p, the AA claimed.

Despite this drivers are paying the highest prices on record while other European countries, including Germany, France, Ireland, Holland and Spain, have seen the cost of petrol fall.

It is thought that British retailers have chosen not to pass on the price reduction because of lower than expected profits over the Christmas period.

Drivers are already paying high prices for fuel due to the rise in VAT and petrol duty which came into effect on January 4. However, the increase in price cannot be explained by the increased tax alone.

The average price of a litre of petrol has risen from 127.21p on January 4 to 128.6p at the end of this January, according to figures released by the AA.

AA spokesman Luke Bosdet said: ‘The fact that we know European retailers passed [the fall] on leads you to only one conclusion: That our retailers are keeping their prices high and enjoying the profits.’

The wholesale petrol prices have been disputed by Brian Madderson, chairman of the Petrol Retailers Association, who said that they can be calculated by different measures.

He defended the decision by some retailers not to lower prices saying “they are not a charity” adding that “some are family businesses are struggling for survival”.

David Cameron has hinted that he will bring in a fuel stabiliser to halt the burden of petrol price rises on motorists.

The Prime Minister said he wanted a “fair” system as the oil price rose to $100 (£62) a barrel because of fears that turmoil in Egypt could close the Suez Canal.