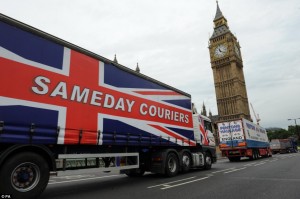 Fuel protests in London during the last round of protests

The Road Haulage Association welcomes the news that the Prime Minister intends to revisit the Conservative proposal to ‘share the risk’ of higher fuel prices between the government and road users.

“We supported the proposal of a fair fuel stabiliser when it was first raised four years ago and we shall be supporting it now”, said RHA chief executive Geoff Dunning. “This will certainly go some way to help relieve the crippling financial burden currently being faced by UK hauliers and we shall be pressing for its implementation as soon as possible.

“We were greatly encouraged when the Coalition, within weeks of taking power, proposed the possibility of a fuel duty stabiliser and were extremely disappointed when the plans were shelved for ‘financial reasons’. In 2009, road users contributed nearly £50 billion to Treasury coffers”, Dunning continued. “£32 billion of that came from fuel duty and VAT on fuel yet only a small proportion was returned through road building and maintenance. The fact that the price of fuel before tax has risen dramatically means that the Treasury will get far more revenue than expected from the hike in fuel duty on 1 January and the VAT increase on 4 January, so 2011 looks set to be a bumper year for tax income from fuel.

“The money is there”, concluded Dunning. “Let’s see some of it being used in a way that may well provide the lifeline that UK hauliers have been so desperately waiting for”.

Source and thanks Fleet News