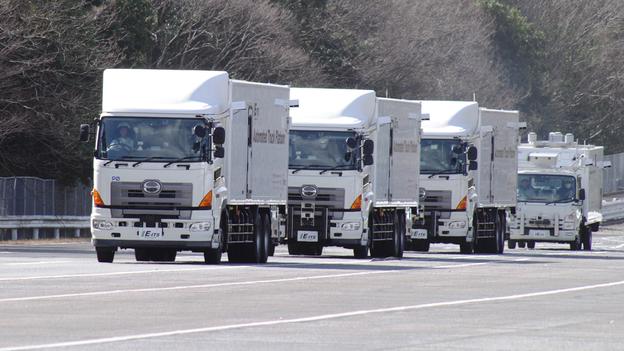 Driverless lorries could hit the mean streets and motorways of the UK if testing is successful.

The lorries will travel in a tight convoy, connected by wifi and utilising an array of sensors and cameras to keep them (and other drivers) from harms way.

The convoy will be controlled by the lead vehicle with the others following closely behind. Fear not my fellow motorists, a trained driver at the wheel but not directly in control. This will allow all vehicles to remain under the control of a driver in the event of an emergency or systems failure.

In the hypermiling community this fuel saving technique is used heavily to help further increase fuel efficiency. Known as drafting, its suggested by some seasoned Hypermilers that  following a vehicle in front close enough will help reduce fuel consumption by up to 40% in the right condition.

The first round of tests will first take place on tracks and then progress to quiet motorways overnight. This will help reduce the risk to fellow road users. This will be followed by further exhausted testing to see how the vehicles react in a heavy traffic environment.

This concept isn’t new to the industry. Both Scania and Daimler have been testing the use of “self-driving” lorries for some time