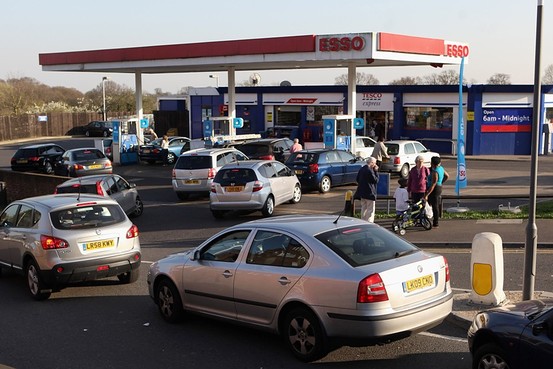 Even though the union Unite has not confirmed the tanker strike for the Easter holidays, Motorists are still queuing at the pumps causing shortages even before the planned action. Panicked motorists have been spurred on by a mix of misinformation coming from the UK government and media.

First Francis Maude was openly recommending stockpiling fuel in Jerry cans, followed up from the rear by Ed Davey telling motorists to keep half a tank in reserve. Mr Davey has again changed his tune and is now advising to top up when you are at two thirds of a tank. This farce has continued as scores of filling stations remain dry as panic buying ensues.

Petrol sales have increased by 81 per cent and diesel by 43 per cent compared to normal. The increased demand has caused chaos for retailers with many filling stations implementing fuel rationing.

In response to the fuel farce AA president Edmund King said: “There is no fuel tanker strike and therefore if drivers followed normal fuel buying patterns there would be no fuel shortage whatsoever. We now have self-inflicted shortages due to poor advice about topping up the tank and hoarding in jerry cans. This in turn has led to localised shortages, queues and some profiteering at the pumps.”

In such troubled times for motorists we urge you to keep a cool head and make the most of every drop of fuel. Hypermiling is about maximising your fuel efficiency of your vehicle, its never been such a good time to start!