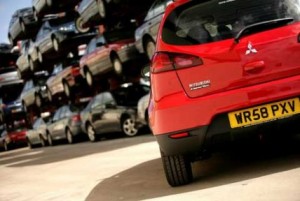 Sales of eco-friendly cars soared to more than half of all new purchases so far this year. But overall sales fell again in April for the 11th consecutive month. It was the worst performance for the month since 1991. A total of 133,475 vehicles were registered in April 2009, down 24 per cent compared with the same period last year, the Society of Motor Manufacturers and Traders (SMMT) said.

Both the government and dealerships are pinning their hopes on the Government’s ‘cash for bangers’ car scrapping scheme, which will start on May 18. The scheme involves owners of ten-year-old cars getting £2,000 – half from the Government, half from the car industry – when they trade in their old vehicle and buy a brand-new model.