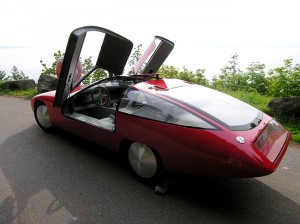 On Saturday, October 11, Craig Henderson smashed his old World book record (103.7MPG) and set a new world record in fuel economy (113.1MPG) when he drove his lightweight and aerodynamic automobile – the Avion -from the Canadian border to the Oregon border.

This time, he started at the Canadian border (Bellingham Wa.) at 7:25 morning of October 11 and ending at the Oregon border at Fort Vancouver at 1:00. Henderson traveled 263.1 miles and used 2.326 gallons of diesel averaging 113.1 miles per gallon, even getting stuck twice in Seattle traffic
Henderson is a contender in the $10 million Progressive Insurance Automotive X PRIZE. He is among more than 120 teams from 28 states and 17 countries who signed a letter of intent to compete for their share of a $10 million prize purse, which will be awarded to those that can design and build production-capable, 100 MPGe (miles per gallon energy equivalent) vehicles that people will want to buy and that meet market needs for price, size, capability, safety and performance. “The Avion is fun to drive, and it gets great mileage,” says Henderson with understated pride. “Our car has achieved 113.1 mpg, driving on I-5 from Canada border to the Oregon border. That’s pretty amazing, especially considering we designed and built it over twenty five years ago.”

“I am thrilled to be able to break our old record. This was a personal goal achieved for me and now we set our sites on the Progressive Automotive X PRIZE. We are in the process of building another car to compete and hopefully win the X PRIZE and we are seeking corporate or personal sponsorship to help us meet or goals,” Henderson said.

Since setting his first world record in 1986, Henderson and his co-designer Bill Green, a professor at Virginia Tech University, have found ways to manufacture their fuel-efficient cars-which run on diesel gasoline- in limited production, using standard engine parts and drive-trains that are innovative only when teamed with the lightweight, aerodynamic Avion chassis and body.

The Avion is among six Washington state teams who hope to win the Progressive Automotive X PRIZE. Other teams from the Pacific Northwest who have signed letters of intent to compete include Western Washington University of Bellingham, WA; Commuter Cars of Spokane, WA; and Kinetic Vehicles of Creswell, OR. Additional competitors include India’s Tata Motors, TTW of Turin, Italy, Tesla Motors of San Carlos, CA and Cornell University of Ithaca, NY.

The goal of the Progressive Automotive X PRIZE is to inspire a new generation of viable, super fuel-efficient vehicles that offer more consumer choices. Ten million dollars in prizes will be awarded to the teams that win a stage race for clean, production-capable vehicles that exceed 100 MPGe.

The Progressive Automotive X PRIZE will place a major focus on affordability, safety, and the environment. It is about developing real, production-capable cars that consumers want to buy, not science projects or concept cars. This progress is needed because today’s oil consumption is unsustainable and because automotive emissions significantly contribute to global warming and climate change.

For more information about the Progressive Automotive X PRIZE, please visit www.progressiveautoxprize.org or email [email protected] e-mail address is being protected from spambots, you need JavaScript enabled to view it .

Ford to join the EV race, brings the Focus EV to the party