Hypermiler Wayne Gerdes coasts into the Guiness Book of Records 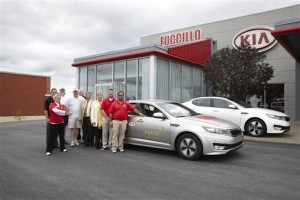 The “father” of Hypermiling Wayne Gerdes has yet again proved that Hypermiling reigns supreme. His latest outing behind the wheel the 2011 Kia Optima Hybrid returned a staggering 64.55 MPG (US) over a distance of 7,899 miles  across America.

The 48-state hypermiling challenge was completed in 14 days, averaging 564 miles a day and consuming just over 5.5 tanks of fuel. The record set is officially titled “Lowest fuel consumption driving through all 48 contiguous U.S. states in a gasoline hybrid car.”

The EPA’s figures for the Optima give a combined MPG of 40, Wayne smashed that with an improvement of  over 61%. I can only image what kind of results he could manage from the Kia Rio that already returns over 88MPG on the combined cycle.

Find out how you too can improve your fuel consumption and save a fortune with our Hypermiling Techniques.

Congratulations to Kia Motors, which is celebrating setting a new Guinness World Record.

Kia’s 48 state challenge was completed in 14 days, driving an average of 564 miles per day.  The Optima Hybrid used just over 5.5 tanks of gasoline to complete the route, recording an average distance of 1,418 miles between fill-ups. To comply with Guinness World Record guidelines, the Optima Hybrid had to carry two people and their luggage throughout the journey.

The record attempt was verified by Philip Robertson, Adjudicator at Guinness World Records, who also presented the drivers with their Guinness World Record certificate at an official handover ceremony at Kia Motors’ manufacturing facility in West Point, Georgia on September 12.

The record set is officially titled “Lowest fuel consumption driving through all 48 contiguous U.S. states in a gasoline hybrid car.”

Senior Executive Vice President and COO of Kia Motors Corporation, Thomas Oh, commented, “Kia Motors is deeply proud to have set a new Guinness World Record.  It is testament to the quality of the design, engineering and production methods of the Kia Optima Hybrid.  The drivers had to complete their unsupported drive through all kinds of American terrain and weather conditions and they did it without a single hitch from the Optima Hybrid while setting what is such an impressive fuel consumption figure.”