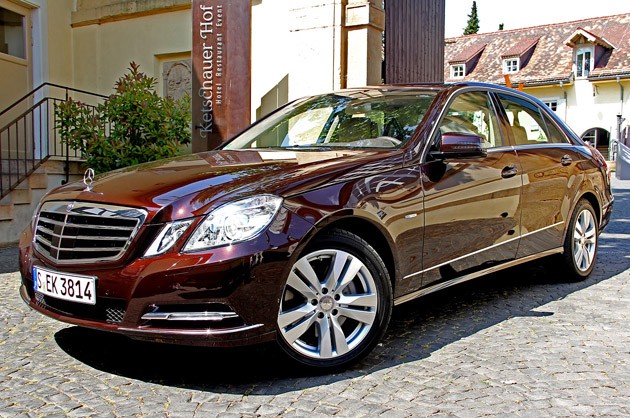 It must be an interesting time to work for Mercedes. Over the past few years, their cars have been experiencing changes in almost every category, from the revolutions that have defined the Class A to the mellow modernisation of the Class C. Mercedes have responded both to the fashionable rise of SUVs, and to the explosion of electric (and/or hybrid) cars. Now it is the Class E’s turn to pay the tax of time.

In the case of the Class E, the change takes place mostly on the surface, at least from what we know so far (which is, admittedly, not a great deal – the German company is being as frustratingly quiet as ever, and only a few images have leaked). In fact, the best term to describe what is happening to this model is not so much ‘mutation’ as restyling. The brunt of the stylistic offensive has been taken by the front of the car. Anyone familiar with the old model will be able to recognise the differences at a glance. The bumper is entirely new, and the general morphology is leaner, shorter and sweeter. The headlights make for a synthetic example: we have gone from an architecture of four composite lights to half that number – two lone discs that are simpler, but in a certain way more docile, more friendly than what we saw before.

This restyling process is a general and rather sudden one. It is general, because it touches on all of the Mercedes models available in the Classe E – the sedan, the station wagon, the cabriolet, and the coupé. It is sudden, because the present model dates to 2009, only three years back. With so many chores already on the minds of the Mercedes stylists and engineers, you would have expected work on the Class E to be taken at a gentler pace.

In the bigger picture, though, the timing makes sense. In part, it is a matter of dealing with the competition. The new Class E will be unveiled, if all goes according to plan, at the 2013 Detroit Auto Show. This counters competitors at the parallel Los Angeles show, some of which are highly anticipated – the new Volkswagen Beetle, for one, will make its appearance in Los Angeles and is expected to generate some waves (though the specs are unknown as of yet, alike to the Mercedes Class E). And the new German cabriolet is far from the only challenger. The long list of new cars emerging to steal the public’s attention includes the BMW Series 5, the Audi 6, and the Lexus GS. All are fresh, all are good-looking, and all have something distinctive that makes them worth a look, if not a drive.

Aside from the market’s law of the jungle, the other main drive behind the novelties of the Class E relates to the general change of style taking place within Mercedes. As mentioned at the beginning of this article, the German manufacturers are changing their look to present themselves as younger and more dynamic. And that’s the type of evolution that embraces all their cars if it does one.