VW Up! shows off some Epic car sharing 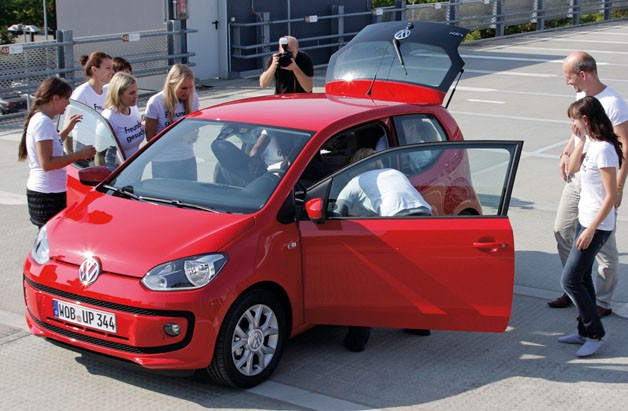 We all know that car sharing is a great way to cut journeys and save money by how far can you take it? Step in VW and its micro four seater the “Up!”.

VW managed to cram 16 flexible citizens into the pint sized car with no reported injuries. With two in the boot, one on the dashboard, seven on the rear bench, four on the front seats and two in the foot wells. Its not quite the 20 VW managed to squeeze into the new Beetle but still an achievement for a car that is only 3.54 metres long and 1.64 metres wide.

The Up! is set for release in 2012 and no doubt that record will be smashed by contortionists when it hits dealers shelves.

VOLKSWAGEN up!  THE SMALL CAR IS VERY LARGE INDEED!

The up!, the smallest new Volkswagen, is a very spacious car. To prove this thesis, employees at Volkswagen Communications made an attempt at an unofficial world record. The results: not only is it possible for four people to sit comfortably in the new up! in normal use – if one really tries hard, many more people can fit into the car: 15 women and one man squeezed themselves into its interior spaces. It was not all that comfortable any more, we must admit!

Two in the boot, one on the dashboard, seven on the rear bench, four on the front seats, two in the footwells – then the boot lid and doors were shut, and the windows were closed. A world record! 16 people in the new up!. In this record attempt, the goal was not so much comfort as it was to have a lot of fun. And that is why such record attempts have a long tradition: back in the 1950s it was extremely popular to cram as many people as possible into a telephone booth – which in those days was still a very easy to find object. But what is a telephone booth compared to a VW Beetle? At a car meet in Australia, 17 Beetle friends spontaneously decided to squeeze into this Volkswagen icon. In 2010, 20 people – who obviously had extremely high levels of pain tolerance – raised the bar with a record in Wilmore, Kentucky (USA), which landed them in the Guinness World Records. Naturally, attempts were also made in the successor model. In January 2001, a record 27 students from the USA squeezed into a New Beetle.

Toyota and BMW to join forces over green car technologies